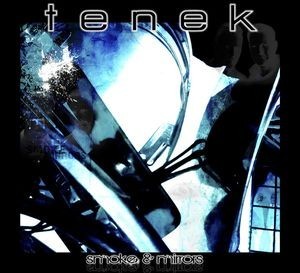 Background/Info: Geoff Pinckney (The Nine, Alien#Six13) & Peter Steer (mainly known for his work as a producer) are back on track unleashing their 3rd full length to date. Five years have passed since the previous album (cf. “On The Wire”) although the band released several EP’s in the meantime.

Content: Tenek remains to me one of the most underrated electro-pop bands in the scene. “Smoke & Mirrors” only confirms their great writing skills, and also their unique sound. Tenek sounds like pure electro-pop music, but with a little rock-flavor on top. A few more little funky elements can be noticed as well. It sometimes reminds me a bit of 80s influences, but with this fresh and typically Tenek touch on top.

Tenek moves on the edge of indie-pop music. It’s a styled and danceable production based upon alluring electronic treatments, carrying choruses and subtle arrangements. The work is accomplished with grace and finesse. “Smoke & Mirrors” features multiple danceable cuts while a few more melancholic and reverie-like songs can be heard as well.

A last and essential element remains the outstanding and alluring vocals by Geoff Pinckney and here again I would say he probably is one of the most underrated singers in the pop scene. This guy has a great and charismatic voice, which totally matches with synth-pop music.

+ + + : The main strength of Tenek’s new work appears to be the mix of a solid electro-pop basis mixed with a few funky influences and a sweet, but carrying rock touch on top while brilliant vocal parts are fully accomplishing this opus.

– – – : Despite of many cool songs this album maybe doesn’t feature an absolute hit.

Conclusion: “Smoke & Mirros” is a beautiful and styled piece of modern electro-pop. I’m still convinced that Tenek is one of the best and most creative electro-pop bands of their time.