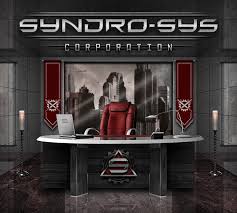 Background/Info: Syndro-syS is a French project set up in 2013. After a digital-EP they now have accomplished an album featuring 9 songs.

Content: The intro-song is pretty orchestral and not entirely representative for the global work. The epic arrangements however remain very present, but the real sound and main influences of this trio is focusing on dark-electronics and heavy industrial guitar parts. The guitar empowers the electronic composition while the female vocals are hiding huge doses of rage and passion.

Syndro-syS reminds me a bit of Helalyn Flowers, but with a stronger and more explicit dark-electro style. There’s a real divine balance between electronics and guitar, which reaches a climax on “My Bad Faith”.

I think it’s not a coincidence if the last song is a remix by Dolls Of Pain, which deals a bit with similar influences although they’ve boosted the electronic part of “Pious Company”.

+ + + : This is more than a successful debut! This band reveals a great maturity while this work features a few great songs. I also like the digipak format.

– – – : I would have enjoyed to hear a few more songs. Nine tracks is not bad at all, but considering that there’s one remix, one intro-like cut and one intermezzo-minded song on it, you only get 6 songs to make up your mind.

Conclusion: I experienced this album as a real revelation made by a real promising formation, which has the potential to catch the attention of a leading label.