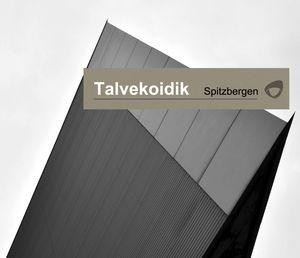 Content: Kai Christian Hahnewald is an artist of many talents, but especially his hard industrial & rhythmic S.K.E.T. project has a huge reputation on industrial music planet. Hahnewald also contributed to multiple side-projects and now it’s time again to rediscover the more sophisticated sound formula of Talvekoidik.

The 3rd full length by Talvekoidik is an invitation to join the arctic Island of Spitzbergen. It’s an ambient invitation to dream away on pure cinematographic atmospheres mixing symphonic arrangements and refined piano passages. But Talvekoidik is not exactly composing an ambient music style as it all appears to be more complex and detailed. The work is based on multiple little sound details and sonic patches. Some passages of the work get pretty close to glitch and experimental sound treatments. This impression has been reinforced by slow-driven broken rhythms.

“Spitzbergen” appears like an exorcism of multiple sound ideas. In the end it all appears to be a mixture between pure experimentalism and sound intelligence. That brings Talvekoidik to explore dubby passages as well (cf. “Drift Ice Whisper” while getting into pure IDM (cf. “Experdition Arctic”).

There are many beautiful songs on “Spitzbergen” and even if I have a little preference for the outstanding IDM-orientated “Expedition Arctic” I have to admit that some of the pure cinematographic pieces and especially the title track, are absolutely phenomenal in their global arrangements and progression. There also is an intriguing mysterious flavor emerging from this song, which is created by a kind of female chant in the background.

I also have to tip “Falcon Eyes”, which sounds like a perfect resume of this album, merging all different ingredients with each other, but especially the beautiful and overwhelming ambient strings are the main strength of the song.

Conclusion: This is for sure the most diversified and subtle album of Talvekoidik, which has seriously evolved towards a more ambient and especially cinematographic creation. This album features 8 songs of pure sonic lust.

Since you’re here … … we have a small favour to ask. More people are reading Side-Line Magazine than ever but advertising revenues across the media are falling fast. And unlike many news organisations, we haven’t put up a paywall – we want to keep our journalism as open as we can. So you can see why we need to ask for your help. Side-Line’s independent journalism takes a lot of time, money and hard work to produce. But we do it because we want to push the artists we like and who are equally fighting to survive. If everyone who reads our reporting, who likes it, helps fund it, our future would be much more secure. For as little as 5 US$, you can support Side-Line Magazine – and it only takes a minute. Thank you. The donations are safely powered by Paypal.
Tags: Talvekoidik