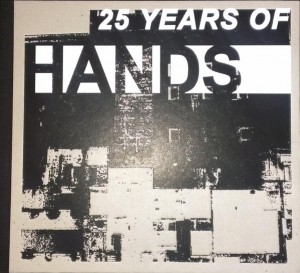 Content: The industrial label Hands is celebrating its 25th anniversary with an impressive 4CD release featuring 36 active bands from the label. This celebration also is an opportunity to mention the label owner Udo Wiessmann and his partner in crime Nicola Bork. Udo Wiessmann founded HANDS in 1990 as an independent platform to release his own music from projects like Atrum, Severance and of course Winterkälte. But he progressively started to release productions from other bands as well, becoming a growing industrial label. 25 years later the label became one of the absolute leading forces of industrial music. More than 300 productions got released and one of the main particularities always has been the package and the artwork of Nicola Bork. Hands also became famous for its annual compilation series “Forms Of Hands” and the label festivals.

But Hands also became one of the most open-minded industrial labels embracing new bands dealing with IDM, industrial-trance and different forms of d’n’b mixed with industrial music. Udo Wiessmann always had a nose to discover new talents so the least I can do is to thank this visionary music lover for his great knowledge and passion.

Over now to the content of this impressive album, which for its first pressing is available as a carton book size with all inscriptions in a kind of relief? It looks simple, but simplicity often is the mark of great artists and in this case of a great label. The 48 contributors have been put in chronological order from A to Z opening with and a hard rhythmic-noise cut, which directly reveal one of the main music styles of the label. There’s a great diversity in the label roster so this 1st disc moves from cool industrial-techno vibes by 13TH Monkey to minimal and tribal-technoid grooves by Ah Cama-Sotz to the sound intelligence of Angina P to the sophisticated sound creation of Cervello Elettronico, which is joining IDM to the perfect symbiosis between industrial and IDM of Geistform. If you prefer the hard-hitting industrial style, which is commonly defined as rhythmic-noise and power-noise you’ll be pleased by artists like 5F-X and Cacophoneuses and the violent loops of Edgey.

The 2nd disc takes off by a real sonic earthquake created by Greyhound. And here again the bands are clearly moving from one style to another while always remaining driven by industrial vibes. The pure industrial power of Hezzel is quite noticeable, but I also have to mention Maschinenkrieger KR52 Vs. Disraptor and Illegal Trade in a similar genre.

A more sophisticated cut has been composed by Heimstatt Yipotash, which also explores experimental fields. Kaibun explores experimental paths as well while Hysteresis did with some extra ambient and electronic elements on top. Hydrone probably features one of the most ambient cuts on the sampler.

The 3rd disc opens by Mono No Aware, which became an old servant of the label. This band still stands for total sound violence. Monolith coming up next remains one of the most refined industrial artists, which here explores IDM fields. Phasenmensch and S.K.E.T. both deliver great IDM minded cuts as well. I also want to make a special mention for the elaborate industrial track by Saturmzlide. Saverio Evangelista (Esplendor Geometrico) is one of the biggest names on the sampler and he took the last track of this disc for his side.

The final disc takes off with a pure soundscape track from Schachtanlage Gegenort. Shoria moves on with a great IDM inspired cut. Other noticeable names in the genre are Talvekoidik and Totakeke.

One of the hardest cut of the sampler has been featured by Tatlum. Wieloryb sounds quite heavy and furious as well. A different industrial format has been revealed by Yura Yura getting the honor to be the final band of the disc and the sampler. I especially like the zombie-like vocals on top of the track. But the last band I want to mention is the one of Udo Wiessmann and definitely one all industrial lovers know. Winterkälte stands for hard and merciless industrial music.

A real important aspect of this sampler also is that the bands delivered new and/or previously unreleased songs. If I had to think of one regret it will be the fact that it only concerns bands that are still active and/or signed to Hands. It would have been cool to get bands like M², Orphx, S.I.N.A., Punch Inc, Empusae, Admx-71 and of course Klinik.

Conclusion: There’s no better way than celebrating an anniversary by such an impressive compilation! This release will give you a perfect view of industrial music and more specifically about one of the leading labels in the genre!