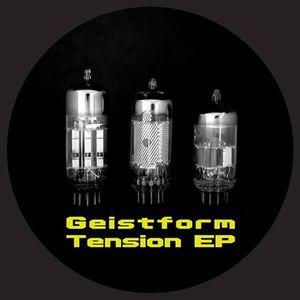 Content: Geistform is one of those noise engineers I was immediately convinced by. Rafael M. Espinosa has this particular feeling to decompose and recreate sounds, which can’t leave you unmoved. He released impressive studio albums mixing industrial and IDM, but the main force of this project always remained the unique analogue vibes emerging from the composition.

Geistform is now back on track with a vinyl 12” featuring 4 new songs. The main influences running through this work are a little bit different and clearly worked out for the dancefloors. “Tension” indeed stands for Geistform going techno although I have to reassure the fans it’s not a cheap and boring techno format.

Geistform remains animated by darkness and fascinated by the passion of sound manipulation. The result is high danceable piece of music, which can be defined as minimal industrial-techno music.

The title song is a great opener, which brings us directly into the flow while the trance loops are empowering the danceability of the track.

“Attractor” coming up next is not only a minimal-minded composition, but you here will recognize the subtle sound intelligence of this alchemist. This is a great song.

The B-side confirms the obscure side of the work mixed by the dance-intelligence and industrial touch. Geistform remains devoted to underground music and “Interaction” is a track that can’t leave you unmoved. The dark dance vibes feel like a command to bring you to move! “Dark Matter” is a rather symbolic title for the global sphere hanging over this work. It sounds more linear although still punchy.

Conclusion: “Tension” is one more release bringing opposite poles like industrial music and techno closer with each other. It’s a sophisticated industrial-techno music meant to set dancefloors on fire!

Since you’re here … … we have a small favour to ask. More people are reading Side-Line Magazine than ever but advertising revenues across the media are falling fast. And unlike many news organisations, we haven’t put up a paywall – we want to keep our journalism as open as we can. So you can see why we need to ask for your help. Side-Line’s independent journalism takes a lot of time, money and hard work to produce. But we do it because we want to push the artists we like and who are equally fighting to survive. If everyone who reads our reporting, who likes it, helps fund it, our future would be much more secure. For as little as 5 US$, you can support Side-Line Magazine – and it only takes a minute. Thank you. The donations are safely powered by Paypal.
Tags: Geistform