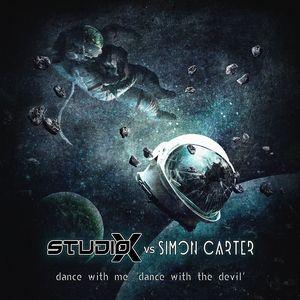 Content: The purest ‘dance’ project on Alfa-Matrix strikes back with a totally new EP announcing the new album “Ad Astra Volantis” by Studio-X vs. Simon Carter. The Australian-English project appeared to be quite successful with their last year released album “Breaking The Void”.

This EP moves on a pure ‘dance’ style, which is often reminding me of some of the most successful electro-clash hits and I especially refer to Benny Benassi as a potential source of influence. There’s a similar love for deep vibrating bass lines, flat sounds and vintage dance beats. The title song is a real smasher revealing a great progression in sound and writing. The vocals are a bit dark and spooky-like injecting a rather underground touch to the song. Next comes the so-called “Alternate Edit”, which sounds even darker in sound.

There also is a pretty cool and harder remix by 00tz 00tz, which reminds me a bit of Nebula-H.

After the softer song “Can You See” we get another potential smasher entitled “White Knight”. This is one more cool and well-crafted dance-trance cub song with a rather cold touch on top. I here again like the production of the vocals, which remains pretty robotic. The pleasure goes on at “Too Late”, which sounds like pure electro-clash and very Benny Benassi like. “Away From Home” sounds pretty similar and again we get a new potential dancefloor killer. The song is driven by great lead sounds and the usual familiar dance kick.

“Travelling (Dead Of The Night)” is nothing less than one more exceptional song and into electro-clash while featuring cool and funny samplings. The last song “Changing Times” features the totally unknown band A2B2 and even if this is not a potential hit, it’s definitely more than a simple B-side.

Conclusion: This EP reveals 8 new songs plus 2 remixes. Can we still speak about an EP here! Studio-X vs. Simon Carter gives much more on one simple EP than most of the bands on a double disc! You have to like ‘dance’ and electro-clash to admit that this work truly is a masterpiece and definitely one of the best EPs of the year!

Since you’re here … … we have a small favour to ask. More people are reading Side-Line Magazine than ever but advertising revenues across the media are falling fast. And unlike many news organisations, we haven’t put up a paywall – we want to keep our journalism as open as we can. So you can see why we need to ask for your help. Side-Line’s independent journalism takes a lot of time, money and hard work to produce. But we do it because we want to push the artists we like and who are equally fighting to survive. If everyone who reads our reporting, who likes it, helps fund it, our future would be much more secure. For as little as 5 US$, you can support Side-Line Magazine – and it only takes a minute. Thank you. The donations are safely powered by Paypal.
Tags: Studio-X vs. Simon Carter