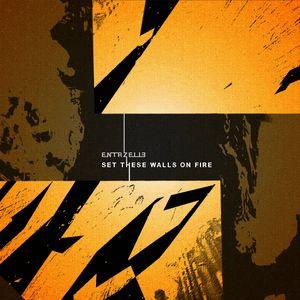 Content: Entrzelle is one of the newest signings to the Alfa-Matrix roster. This band operating from Los Angeles (USA) was set up by David Chamberlin and Malice Vext. They define their music as ‘explosive cinematic industrial’, which I think must be a new label.

Entrzelle self-released a few productions before joining hands together with Alfa-Matrix to release this new EP. Sound-wise this band composes an intelligent and complex format of electronics, which reminds me a bit of Haujobb in a more contemporary format. There’s an interesting and sophisticated sonic creation, which sounds like an experiment in electro-pop or you can call it industrial-pop as well.

The songs especially catch my attention for their multiple sound manipulations. I wasn’t surprised at all to find out that Entrzelle claims to be inspired by an artist like Seb Komor. The final result is not exactly similar, but the love and passion to create and manipulate sounds is pretty comparable.

Entrzelle for sure injects something new into the wider fields of the electronic underground scene, but this complexity also appears to be the element that makes the music not accessible for a wider audience. I’m not surprised that the remix of “Pressure” by Psy’Aviah is one of the best and especially most danceable cuts on the EP. You here will notice some danceable vibes on top of Entrzelle’s sound.

Another recommended song is “Proximity Love”, which somewhat moves into evasive passages while it’s carried by some danceable vibes. Avarice In Audio has remixes the song “Rites Of Romance” adding some cool synths on top of the song.

The other songs are less danceable and not exactly EP-minded if you consider this format as DJ and/or club-minded. Entrzelle sounds more like a band to listen to and that’s maybe why they call it ‘cinematic’. I’m not always convinced by the twist between music and vocals, which sometimes sound like different entities that have been forced to match with each other. On the other side I really appreciate the concept of this release featuring 8 different songs.

Notice by the way that 3 songs were originally released on their debut full length album, “Part Of The Movement”.

Conclusion: Entrzelle is an interesting newcomer on Alfa-Matrix although not the band with the most accessible sound. This EP is an excellent way to get a bit familiar with the duo and make up your mind about their complex electronics.