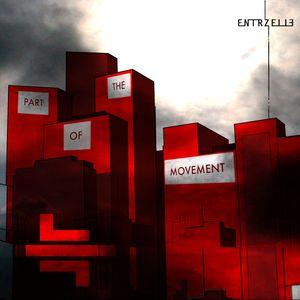 Content: Next to the new EP “Set These Walls On Fire” Alfa-Matrix and Entrzelle also unleashed a revisited version of their self-released debut-CD “Part Of The Movement” (2012). This new version features original 13 songs plus 6 extra tracks.

It’s an interesting way to discover Entrzelle, which I discovered on the latest “Endzeit Bunkertracks”-series. They claim to compose ‘explosive cinematic industrial’ music, which is an interesting term to analyze. I don’t experience their sound as totally ‘explosive’, but probably more ‘cinematic’ while we can speak about ‘industrial’ (quite commonly used in the USA) when noticing the raw sound treatments.

Sound-wise Entrzelle is a great band for being freaky sound creators reminding me of legendary artists like Haujobb and Seb Komor. There’s a nice fusion between a kind of astral pop sound and raw sonic manipulations. It’s always complex and sometimes moving on the edge of IDM. Entrzelle sounds unique in their genre and this ‘genre’ is pretty diversified. Some elements running through “Come Through” remind me a bit of future-pop. “Waste” is one of the most noticeable cuts for a truly Norwegian sound-touch. I’d swear that I was hearing pupils of Seb Komor composing this song. A few technoid arrangements can be heard on “Dawn” while the Haujobb fans will be interested to discover “Pressure”.

There definitely is a lot to discover on this album although I’m not always convinced about the coherence between the songs. I got the impression of being in front of impressive walls of a castle without cement. I’m missing a climax on most of the songs while the production of the vocals can’t fully convince me. There for sure is a lot of passion and emotion emerging from the vocals, but the sound and vocals don’t always match.

Among the ‘bonus’ songs we get two previously unreleased songs plus some remixes. Among both new songs I especially like “Keep The Bastards Poor”. This is the best Entrzelle song I’ve heard so far. It’s harder and definitely somewhere in between pop- and industrial music. It’s a divine experiment and I also prefer the vocals here, which sound like spoken samples.

The other songs originally appeared at the self-released EP “Bionic Shift” (2013) while you’ll hear the ‘album’-mixes on “Part Of The Movement”-CD. The remixes sound a little bit harder while some symphonic arrangements can be heard now and then. My personal favorite is the song “Come Through – Violate”. I also prefer the vocals on the remixes instead of the album-versions.

Conclusion: If you’re in search of an ‘industrial’ alternative to common electro-pop standards, Entrzelle is definitely something for you!

Since you’re here … … we have a small favour to ask. More people are reading Side-Line Magazine than ever but advertising revenues across the media are falling fast. And unlike many news organisations, we haven’t put up a paywall – we want to keep our journalism as open as we can. So you can see why we need to ask for your help. Side-Line’s independent journalism takes a lot of time, money and hard work to produce. But we do it because we want to push the artists we like and who are equally fighting to survive. If everyone who reads our reporting, who likes it, helps fund it, our future would be much more secure. For as little as 5 US$, you can support Side-Line Magazine – and it only takes a minute. Thank you. The donations are safely powered by Paypal.
Tags: Entrzelle