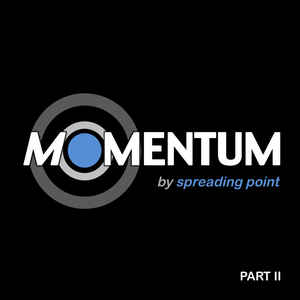 Background/Info: Spreading Point is a German duo that saw the daylight in 1993. After a few self-released productions they went in ‘hibernation’ for more than 10 years, but reactivated the project in 2010. New stuff has been released and this EP completed a 2-volume mini-album series. “Momentum Part II” reveals 5 new songs plus 5 remixes.

Content: There are clearly 2 parts featured on this EP (or mini-album). You first of all get 5 captivating electro-pop songs, which are merging evasive passages together with catchy song structures. The songs sometimes remind me of Elegant Machinery and Spock. There’s a similar, captivating and catchy sound approach with great choruses on top. Next to a great opening song, “The Blitz Kids” coming next is a typical poppy electro-pop song that will catch the attention of numerous pop fans.

The remixes have been accomplished by Psyche, People’s Theatre, Wave In Head, The Dynamic Master and Shiny Darkness.

+ + + : If you like classical synth-pop without real surprises, but maximum efficiency I can only, but recommend this “Momentum”-series. Among the 5 original tracks there are 3 brilliant cuts. This is electro-pop music with a great retro-touch, but first of all a well-crafted and accomplished production with great synth sounds. The remixes feature interesting names and Psyche definitely sounds as a cool contributor to this work. I however prefer the remixes by People’s Theatre and The Dynamic Master.

– – – : Next to the 3 outstanding original songs, both cuts left are nothing more than simply poorly-inspired B-sides track. But you don’t hear me to complain as I’ve been more disappointed by the remixes, which bring some diversity, but no real bonus to this EP. I especially expect more from Psyche!

Conclusion: “Momentum – Part II” stands for great original versions and rather disappointing remixes. So in the end it would have been better releasing a real full length with all original versions from both “Momentum”-EP’s instead of 2 EP’s.