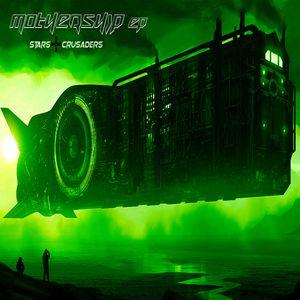 Content: Last year Stars Crusaders unleashed their official debut album “New Horizons” revealing a strong potential and interesting ideas in progressive electro-pop music. “Mothership” was a song originally released on this album so this EP is a way to get back to their album and one of its best tracks.

The EP takes of with the “Original Version” of “Mothership”. This is a cool approach of modern electro-pop music carried by a fantastic and somewhat electro-wave like tune. There also is an interesting approach in the production of the vocals moving in between clear passages and more robotic parts.

“Mothership” has been remixed by two genius remixers. First comes the pretty clubby-version of Rob Dust and next a sophisticated approach by Rotersand.

“Supermarket Signs” was another attention grabber on the full length album and a rather logic choice to be placed on this EP-tracklist as well. The “Album Version” is just a way to bring this song back to life. It’s hard and powerful while still carried by a great melody line while the vocals reflect a real charismatic feeling.

“Supermarket Signs” was remixed by label mate Autoclav1.1, Interface and the rather unknown nTTx. Autoclav1.1 did it in a more –and expected, experimental and evasive way. The best remix for sure is the one by Interface for its great club potential.

Last, but not least we get an “Extended Version” of “Prologue”, which was the opening cut of the album. This reworked version sounds totally appropriated to serve as the final song. It’s quite different in style and influences revealing weird zombie-like vocals.

Conclusion: An EP always is an opportunity to bring album songs into the spotlight. We here get two great main songs and a few noticeable remixes.