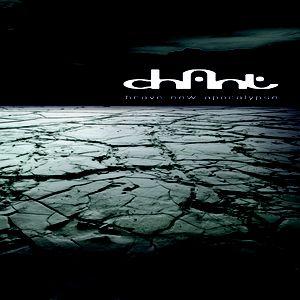 Content: This is already the 3rd full album of Chant, written and produced by Bradley Bills from Austin – Texas (US) and mixed by Sascha Konietzko (KMFDM).

Eleven raw songs split your stomach, full of grinding guitar blasts and haunting noise loops, which makes this CD sound like an old school industrial soundtrack! If you hear opener “Brave New Apocalypse” and “Bring Me The Head Of The Music Critic” you can directly hear the influence of Nine Inch Nails combined with great percussion.

For some kind of reason the voice of Bradley reminded me, especially on the very danceable “Cycles”, of the voice of Perry Farrell (Jane’s Addiction). The very uptempo “Manifesto” reminded me of “Burning Inside” from Ministry, which is in this case a compliment! Jules Hodgson (KMFDM) plays guitars on the downtempo atmospheric “Repeat Repeat”.

“Universal” was already released before as a first single and is for sure one of the best tracks of this album. “Adoration” and “All The Same” sound very club oriented while on “Dead Muse” the guitars are especially in the foreground.

On the last 2 songs “Create To Destroy” and “Song I Never Wanted”, which sounds like a ballad, Bradley slows down the tempo a bit to end in beauty.

Chant is a band you have to check out for sure if you get the chance because the audio-visual show combined with percussion is really awesome!

Since you’re here … … we have a small favour to ask. More people are reading Side-Line Magazine than ever but advertising revenues across the media are falling fast. And unlike many news organisations, we haven’t put up a paywall – we want to keep our journalism as open as we can. So you can see why we need to ask for your help. Side-Line’s independent journalism takes a lot of time, money and hard work to produce. But we do it because we want to push the artists we like and who are equally fighting to survive. If everyone who reads our reporting, who likes it, helps fund it, our future would be much more secure. For as little as 5 US$, you can support Side-Line Magazine – and it only takes a minute. Thank you. The donations are safely powered by Paypal.
Tags: Chant