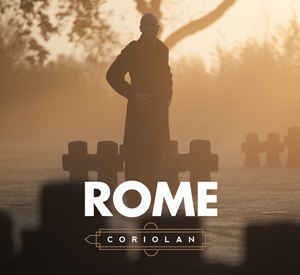 Background/Info: Jérôme Reuter has now been actively releasing productions since 2006 under the Rome moniker. After the massive and outstanding previous album “A Passage To Rhodesia”, he’s already back on track with a new fascinating work ‘based on the story of one of the most opaque of Shakespeare’s tragic heroes, Coriolanus.

Content: “Coriolan” moves on from where the previous releases left off. Rome again accomplished an open-minded sonic artwork mixing multiple styles with each other. Each song sounded like its focus was based on a different influence, but in the end it all remains pretty homogenous and compact. The great and deep timbre of voice from Jérôme Reuter creates solid cement between the songs while there’s a beautiful osmosis between all the influences and instruments.

The beginning is a kind of look back to the martial and epic earlier work of Rome while the next piece explores the more familiar dark-rock and psychedelic-ballad style and ‘chanson’ of the recent productions. The global writing is elegant and reveals a great progression in structure. From sensitive ballad passages to heavier dark-rock cuts, this album truly appears to be a sonic puzzle.

Jérôme Reuter asked a few guest musicians to join in and accomplish this new and beautiful work.

+ + + : The growing eclecticism of Rome is fascinating. He’s one of the few artists I know who has brought a new dimension to the ‘stereotypical’ neo-folk and martial genre by injecting other influences. It makes it all more accessible and covered by a sweet –although dark, flavor. The album reveals multiple beautiful and poignant songs.

– – – : I regret there are only 8 songs featured on this album, but the good news is that a new album is already announced within a few months.

Conclusion: The great Shakespeare has become the muse to inspire Rome. The result is called “Coriolan”, which stands for a beautiful and deeply artistic sonic creation.