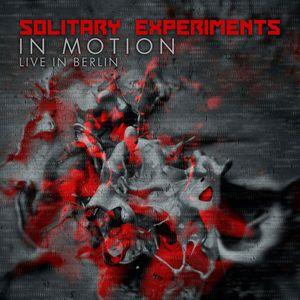 Content: Solitary Experiments last year celebrated their 20th anniversary by a unique live performance in their hometown, Berlin. It happened on the 25th of October at the Huxley’s Neue Welt of Berlin. The show was filmed and recorded and finally got released as a special DVD + CD production while we also got the digital album version featuring 13 songs. The CD features 16 songs and I especially regret that the last song of the DVD “Watching Over You” was not released on the album. I consider this song as a real symbolic one as it was originally released at the “Advance Into Unknown”-album (2003), which also was their 1st opus at Out Of Line following their dark-electro releases of the early years released by Maschinenwelt Records.

When they joined Out Of Line they also evolved into sound, getting closer to the future-pop trend while holding on to some dark-electro influences. I regret they didn’t really get back to their early years preferring to celebrate their 20th anniversary with songs originally released on albums like “Mind Over Matter”, “In The Eye Of The Beholder” and “Phenomena”. But I can assure you we are getting a nice and alluring tracklist featuring some of their biggest hits like “Trial And Error”, “Déjà-Vu”, “No Salvation”, “Epiphany”, “Point Of View” and “Game Over”. We for sure all have our favorites, but I think that the less essential tracks from their impressive discography were forgotten.

A live recording always is something special. One of the main elements of course consists of the show itself –which you’ll have to watch on the DVD, but it also reveals a kind of union between the band and the audience. That’s an important element, which really comes through on the album as well. The only and still essential aspect as well, and that can’t totally convince me are the vocals. You here can notice that Solitary Experiments is not driven by a pure pop-singer. The vocals live are a little bit monotonous and it’s an element, which is also revealing the difference between a real leading formation (like VNV Nation for example) and a great band like Solitary Experiments.

I however deeply respect this band, which I’ve kept an eye on since their very first official album “Final Approach” (1999). Solitary Experiments composed an interesting sound, which is somewhere in between dark-electronics, body-pop and electro-pop.

Conclusion: I think the biggest fans of the band will be pleased by this release and especially the one with the DVD. This live album features great songs from the band although I’m not convinced by the vocals.