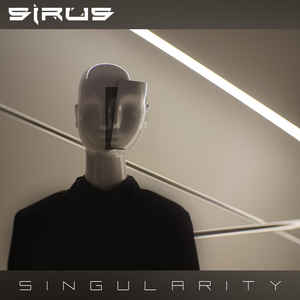 Background/Info: Driven by Josh Rombout, the Australian Sirus project strikes back after two acclaimed official albums. “Singularity” is a pure collector’s item as it’s is available as very limited 7” vinyl and as ‘business card’-CD format (limited to 36! copies). There also is another similar format featuring just the title song while this single reveals 3 cuts.

Content: The title song is an interesting hard and industrial-like electronic song with a cool, icy melodic lead. The song is characterized by harsh, enraged vocals plus female backings. Two versions of “Singularity” are available.

Next there’s a great B-side song, which is definitely different. The song is softer and featuring somewhat robotic-like vocals.

+ + + : Sirus reveals two different sides, but both songs are just great. I like the hard title song, which makes me think to a sort of ‘industrial IDM’ while “Cycleheart” is a kind of minimal B-side cut. I like this band for its ‘anarchistic’ approach just composing electronics without compromises and no limits. This is also a great collector’s item because of the cool ‘business card’-format.

– – – : There’s a kind of duality between the title song and the B-side cut, but in the end both songs are noticeable revealing a diversified single.

Conclusion: “Singularity” is a pretty cool release and without a shadow of a doubt a hot teaser to the next full length of Sirus.