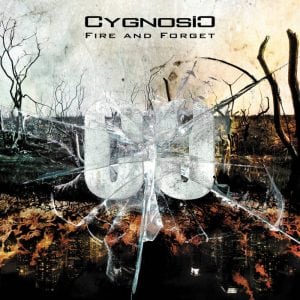 Background/Info: Georg (Georgios) Psaroudakis created Cygnosic in 2007. Eleven years later he can look back at a respectable discography having released 6 studio album plus an album with remixes and a few EP’s. “Fire And Forget” was originally released in 2013 on Deathwatch Asia and now re-released with 3 extra songs.

Content: It’s an opportunity to rediscover this great piece of music on which Cygnosic illustrated great composing skills. The sound appears to be a sonic bridge between dark-electronics and EBM. The zombie-like vocals accentuate the obscure side of the music, which is however characterized by melodic leads. “Fire And Forget” is a danceable work revealing several attention grabbers.

Among the bonus songs I especially noticed the hard-sounding “Light” a stand out song.

+ + + : Greece definitely became a country with great dark-electro/EBM formations and Cygnosic definitely is one among the others. I like the offspring between dark-electro and EBM influences resulting in a highly danceable work carried by strong leads. There also is a more personal touch running through the music, which is mainly coming through by refreshing sound treatments and bleeping sequences. There also is one pretty cool bonus cut featured at this ‘extended version’ of “Fire And Forget”.

– – – : A few softer cuts, which are like little breaks aren’t the most convincing pieces of the work. I here refer to a song such as “The Drowning”. Next to one cool bonus song, both others left don’t really add an expected extra to the album.

Conclusion: This album clearly is a collector’s item as it has been limited to 150 CD-copies. So this is an album for the fans, but if you don’t know Cygnosic yet, this earlier work is quite interesting as well.