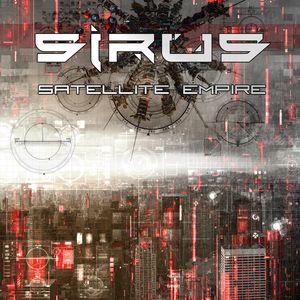 Content: Two years after their official debut work “Broken Hearts Corporate Minds” the Australian Sirus combo strikes back with a new, noticeable production. This band set up and driven by the creative mind of Josh Rombout (aka DJ Sirus) deals with a fascinating and modern format of underground electro, which is hard to grasp as one particular genre.

In comparison to their debut album, Sirus hold on to similar influences, which clearly move from EBM to dark-technoid elements, but the global production became more sophisticated. The main characteristic and strength of this band is their taste to manipulate sounds while experimenting with multiple influences, which are going further than EBM and techno-minded formats.

“Satellite Empire” is a progressive-electro work on, which you will notice beautiful ethereal passages featuring the heavenly vocals of Danielle McKay, but also songs revealing elements of d’n’b (cf. “Loic”, “PRISM”), groovy passages (cf. “Neon Dominion”) and a rather cinematographic final cut (cf. “Surfacing”). The work is complex and like in constant movement, revisiting familiar electro elements and mixing different influences with each other.

Today it’s hard and nearly impossible to speak about an ‘innovating’ band, but I like the way Sirus tries to strive for something different. I rather dare to speak about a progressive electro release, but the most important aspect is for sure that there are great songs featured on it.

I’m referring to a kind of sound intelligence emerging from “Surveillance State”, which appears to be the ultimate offspring between EBM, dark-electro and trance-techno music. I already mentioned the somewhat d’n’b driven “PRISM”, which also reminds me of the complexity and genius of Frontline Assembly. But the most surprising song and still my absolute favorite is called “We Have The Technology”. This track is a heavenly fusion between terrific, progressive electro-body structures and the heavenly ethereal female vocals. It’s not exactly a dreamy song, but a hard and transcendental piece of music. The dreamy side is featured on the opening cut “Ministries Of Truth”, which is a kind of magic intro cut.

A last cut I want to mention is the groovy-like “Neon Dominion” where I especially enjoyed the complementary male- and female vocals, which sound a bit like ‘the beauty and the beast’.

Last, but not least I have to mention that the CD format features 3 extra songs, which are remixes by iVardensphere, Grendel and Aesthetic Perfection.

Since you’re here … … we have a small favour to ask. More people are reading Side-Line Magazine than ever but advertising revenues across the media are falling fast. And unlike many news organisations, we haven’t put up a paywall – we want to keep our journalism as open as we can. So you can see why we need to ask for your help. Side-Line’s independent journalism takes a lot of time, money and hard work to produce. But we do it because we want to push the artists we like and who are equally fighting to survive. If everyone who reads our reporting, who likes it, helps fund it, our future would be much more secure. For as little as 5 US$, you can support Side-Line Magazine – and it only takes a minute. Thank you. The donations are safely powered by Paypal.
Tags: Sirus