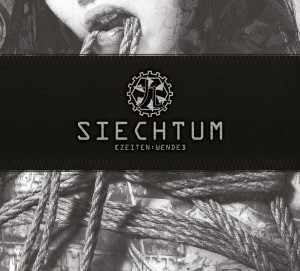 Content: When I discovered this album I first thought that Siechtum had been awakened after a hibernation of 14 years! The electro-industrial project that was set up by Thomas Rainer (L’Âme Immortelle, Nachtmahr) and Joachim Sobczak (Schattenschlag) was active right after the millennium during a rather short lapse of time.
“Zeiten:Wende” is just a re-release of their 3 full length albums (cf. “Gesellschaft:Mord”, “Kreuz:X:Feuer” and “Diagnose:Zeit”), which have been placed on 2 discs. Siechtum has been considered as a pioneer in the genre, which I think is an interesting statement.

I remember industrial music during the 80s, which was composed with an impressive arsenal of hand-made equipment resulting in a kind of ‘art-brut’ sound. Bands like Test Department, SPK and Einstürzende Neubauten were absolute masters in the genre, but there were many less famous and recognized projects dealing with a similar taste. The industrial music progressively evolved towards electro-driven compositions where the sounds got manipulated by monstrous studio effects creating this typical distorted-electro format. Esplendor Geometrico probably was one of the most famous pioneers in the genre, which would rapidly contaminate numerous other bands.

The ‘industrial’ style of Siechtum moved a bit further getting us to the point where dark-electronics and electro-industrial music merged together. I’ll not start a controversy about who really was the first one in the genre, but Siechtum were one of the precursors.
“Gesellschaft:Mord” (2000) brings us back to this early years revealing a typical electro-industrial sound carried by bombastic rhythms and haunting atmospheres. The work remains rather elementary, instrumental and repetitive. A few samplings injected some diversity, but globally speaking this album really suffers from the weight of time. It sometimes starts a bit like an improvised jam session of industrial-inspired music. This is the kind of work, which left me rather skeptical today, but I have to admit that I enjoyed it back in time.

“Diagnose:Zeit” (2001) finally appears to be the most convincing album (today), but the least industrial minded. Siechtum now added real vocal parts to the work, which makes it more dark-electro driven with industrial flavors on top. It definitely is not a classical dark-electro production but rather a band exorcizing some ideas.

We again notice different influences running through the work, which move into epic passages (cf. “Follow Me”) to a kind of ritual approach (cf. “Winterstahl”). This album appears to be the most accomplished and for sure the most elaborated one. The title song remains the best example in the genre.

Notice by the way that the original albums of Siechtum were released by Matrix Tube, which was an earlier subdivision of Trisol.

Conclusion: This album is available in a beautiful digipak format while there also is a box-edition for the biggest fans of the band. I think this work is mainly meant for the fans of Siechtum and Thomas Rainer in particular.