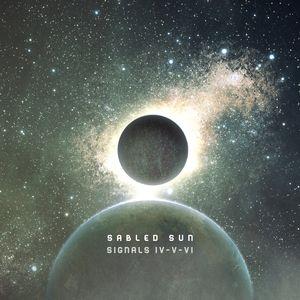 Background/Info: Simon Heath is one of those visionary artists active in the dark-ambient fields who seems to have an endless inspiration to compose new music. While Heath will be forever associated with his main project (cf. Atrium Carceri) he now takes us back to the abyssal soundscapes of Sabled Sun.

This is a collection of three albums, which were originally released as separate albums. Like the first three albums in this series, they now have been released in an alluring digipak format.

Content: The work is inspired by the haunting theme of ‘what happened to humanity after waking up from hibernation deep sleep to an empty world void of human life’. Every single album features one, long during soundscape (track) for more or less one hour.

The answer of Sabled Sun rapidly appears to be a world of despair. A kind of nihilistic vision where the last trace of human life has been absorbed by a cavern-like sound atmosphere. The “Signals”-series is not exactly an easy listening as it needs you entire attention to catch the little sonic details, which are often emerging from the background. The global atmosphere remains extremely dark and I dare to say tormented. “Signals” is not exactly the kind of album to relieve you from depression.

The dense sound layers are like imaginary sonic needles, which are drilling our poor mortal brain. The imagination is exposed to a high degree of torture, but in the end that’s precisely what we expect from this kind of sound, isn’t it?! “Signals” is an invitation to join an endless sound tunnel, which moves towards a crescendo until reaching its target: getting the listener into consternation!

+ + + : This is the kind of work you have to discover by playing it at maximum volume or by using headphones, which reinforce the power of the background noises.

– – – : The work appears to be pretty similar and the lack of diversity can be the main reason you might get bored after a while. This is a production for the heaviest fans in the genre and Sabled Sun freaks.

Conclusion: Sabled Sun clearly reveals another side of Simon Heath, which is mainly characterized by a strong sci-fi & soundtrack inspiration. Speaking for myself I prefer his “21xx”-series.