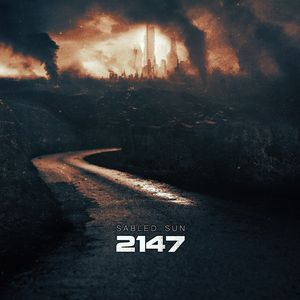 Content: Sabled Sun likes conceptual series releases and “2147” is the 3rd one in the so-called “21xx”-series. Set up by Simon Haeth (Atrium Carceri) this project became a rather prolific sound constructor.

“2147” deals about ‘a man awoken from hibernation to a world in ruins, takes us through the third year 2147’. This man will have to survive and his adventures have been transposed into this new and poignant dark cinematographic sound. The first part of the work clearly evokes an apocalyptic sound view created by an entire arsenal of noises and field recordings. It all results in an atmosphere of angst, but which also moves into evasive passages featuring remarkable and intriguing resonating spoken female vocals (cf. “Our Mechanical Children”).

The soundtrack approach of the work has been accentuated on a few cuts. Heath uses low piano sounds to create a melancholic mood while a touch of experimentalism was added by different new noises. Most of the tracks are rather short and that’s sometimes a pity, especially when you’re totally captivated by one of these cuts. Sabled Sun experiments with different ideas mixing electronic treatments and guitar experiments.

The apocalyptic mood from the beginning comes back again in the last part of the album. “The Space Center” is the most elaborate track and will hold your attention for more than 10 minutes. This is a great piece of music revealing echoing electronic effects and voices lost in space while overwhelming sound layers and meticulous stereo effects progressively join in. “Hibernation” empowers the apocalyptic touch of the work while the piano-like “Dreams Without A Future” appears to be a dreamy, but melancholic final cut.

Conclusion: Sabled Sun always takes the listener away in a dark and pure sci/fi world facing a desolate and often nihilistic vision of the future.