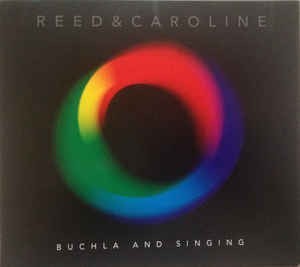 Background/Info: Reed Hays and Caroline Schutz is a duo based in New York who met at college. “Buchla And Singing” is their official debut album released on Vince Clarke’s label Very Records. This is a brand-new label on, which Vince Clarke together with Paul Hartnoll (Orbital) released the single “Better Have A Drink To Think” and the album “2Square”.

The title of Reed & Caroline’s album refers to the vocals of Caroline Schutz (‘singing’) and the analogue modular ‘Buchla’ synthesizer used by Reed Hays.

Content: If you like vintage electronics this is for sure an album that will catch your attention. Reed & Caroline deal with good-old electro-pop music carried by typical computer bleeps. It reminds me of good-old Atari sounds from early computer games. This is the kind of music that might appeal to fans of Kraftwerk, and also more contemporary bands like Welle:Erdball and Client. Caroline’s sweet timbre of voice injects an evasive touch to the electronic treatments of her partner.

Next to this more ‘traditional’ electro-pop with a pure retro style the album also reveals a strong experimental side. This part is not exactly into classical electro-pop songs, but reveals a passion for sound creation. It now rather sounds like a demonstration of analogue sound treatments created by the modular synth of the band. The final part of the work brings us back to more song-related pieces and the chemistry between machines and singing.

+ + + : For years I’ve been convinced that authentic analogue machines and synthesizers all have this kind of magic you never will get when using digital- and or software synthesizers. It definitely sounds old-styled, but still so unique and magical. The electro-pop minded songs are showing interesting composing skills resulting in several highlights like “Electrons” and “Singularity (We Bond)” plus a phenomenal remix of “Bright Light” and another one of “Electrons” by Vince Clarke.

– – – : The experimental-minded cuts are for sure interesting, but they clearly reveal an experimental side, which doesn’t totally fit with the pop-inspired songs. It creates a break between promising debut songs and outstanding final tracks.

Conclusion: Reed & Caroline have accomplished a successful debut work revealing 2 sides. I especially want to recommend the electro-pop cuts bringing the good-old 80s spirit back to life. This is a band to keep an eye on!