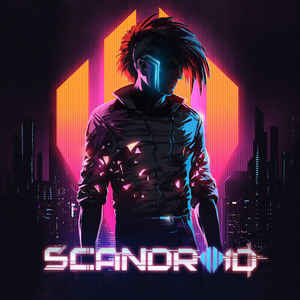 Background/Info: Behind Scandroid is hiding Celldweller’s mastermind ‘Klayton’. Scandroid is meant to be the ‘love letter’ of Klayton to the 80s. After a few EP’s he now unleashed the self-titled debut-album of Scandroid featuring 15 songs.

Content: From the very first notes and sequences you can hear the 80s inspiration, which is mainly characterized by vintage electronics and effects. It sounds a bit space-like, which is a sensation accentuated by numerous effects and sweeps. Most of the vocals are robotic-like, which is another link with the 80s electronics. The songs are carried by solid, melodic leads and dance kicks.

The cover version of Tears For Fears legendary “Shout” is the ultimate link with Klayton’s passion for early electronic pioneers. The songs are rather pop-like and the pop style is catchy and danceable. One song features Circle Of Dust, which is just another project Klayton is involved to while the final track is a remix by Waveshaper. I also noticed a few more cinematographic passages accomplished with orchestral arrangements.

+ + + : “Scandroid” is a successful exposure of good-old 80s electronics with a refreshing and more contemporary touch on top. The songs are well-crafted and you really can feel the musician’s passion and devotion for the 80s decade. There’re some details like a saxophone and somewhat nu-disco effects, which were typical in the 80s decade and, which have been reactivated on “Scandroid”. Next to the rather successful cover version of Tears For Fears’ “Shout” this album features numerous cool songs.

– – – : The originality is hard to find, but it’s really necessary when it concerns an ode of an artist to his favorite music. It definitely brings nothing new, but the magic of the 80s is still a matter of fact so you don’t hear me complaining.

Conclusion: “Scandroid” is a danceable ode to the 80s electronics, which are an important source of inspiration for Klayton. This work will awake some good-old memories and get you to dance!