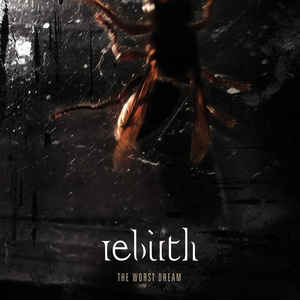 Background/Info: Rebirth is the story of the long-time friends, both involved with electronic music and who finally decided 2,5 years ago to set up a common project. This Swiss duo features Sleepwalk composer Bruno Ruch and Olivier Moser (vocals). Notice by the way Olivier Moser contributed to the writing of a Sleepwalk song featured on the album “Spirits From The Inside”.

Content: Rebirth is clearly inspired by good-old EBM. The sound has a retro-touch while the main characteristics appear to be the dark, haunting atmospheres and the bombast of the percussion parts. Some of the songs are a bit like awakening the spirit of Yelworc.

+ + + : After a rather hesitant debut, “The Worst Dream”  progressively reveals more exciting cuts. The doomy sphere hanging over the songs has something anguishing while the power and bombast of the drums only accentuate the tormenting body-experience “The Worst Dream” is made of. The lyrical content is not happy at all and that’s perfectly summarized in the title of the work while transposed in the music. Both last songs are great remixes by Framework (still involved with Sleepwalk) and Leather Strip.

– – – : I already mentioned the somewhat doubtful debut tracks, which even left me a bit skeptical. I especially noticed less diversity between verses and choruses, which progressively evolves throughout the album.

Conclusion: Compared to the new Sleepwalk album Rebirth still has a way to go to reach a similar level. But this band is also different and only exorcizing EBM ideas while it also is just the debut work. I hope this band will move on and I’m really wondering how the next work will sound like.