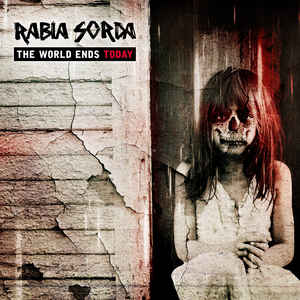 Background/Info: Hocico singer ‘Erk Aicrag’ set up Rabia Sorda in 2003. Five years after the previous opus “Hotel Suicide” the Mexican front man joined hands with drummer Maxx and guitarist Marcus Engel to release what has been announced as the ‘hardest’ Rabia Sorda album ever.

Content: The regular album features 17 tracks and the least I can say is that the sound indeed is pretty hard. The song stand for total sonic violence mixing elements such as industrial-, metal-, dark-electro- and punk music together. “The World Ends Today” reflects a hell vision transposed into enraged vocals and heavy songs.

The limited edition features an extra disc of 8 cuts. You here will discover a few more new- and alternative cuts plus remixes by Cypercore, The Chemical Sweet Kid and Sahlvader. This mini-album also features 2 cover versions (including a song of the album covered by Prismatic Shapes).

+ + + : Speaking for myself I think it’s really interesting to see the evolution of Rabia Sorda throughout the years. While the debut album was a bit hesitating and a kind of dark-electronic alternative to Hocico, the next releases progressively featured a different and harder sound. The guitar playing becomes really important now, creating this hard and merciless industrial-metal approach. The rage appears everywhere at this opus. The vocals (mainly sung in English) are just accentuating the ‘evil’ side of this work. I also noticed a cool punk touch running through several songs. On the bonus disc I especially want to mention a cool remix by Chemical Sweet Kid.

– – – : I expected a bit more from the bonus disc. The remixes are cool, but I can’t say they are adding something extra to the album. It sounds more like songs that were made for fun (cf. Los Saicos cover version) while the usual remixes are quite common for limited releases.

Conclusion: “The World Ends Today” is a nihilistic title for a furious release and you know what, I don’t give a damn sh** if the world would end with such a terrific opus. This is definitely the best Rabia Sorda album to date.