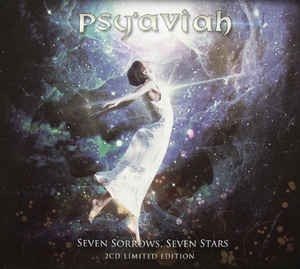 Background/Info: Psy’Aviah has already been active for nearly 10 years now. The Belgian project driven by the creative spirit of Yves Schelpe is already back on track moving on a concept with multiple guest singers. Since Emélie Nicolaï left the band Psy’Aviah has worked with an impressive number of guest vocalists.

Content: The new album features 15 songs revealing a further exploration of modern pop music. The main question about the sound of Psy’Aviah however remains: is it really pop music or what kind of music is it all about? I’ve always liked this band for being atypical and not exactly emulating bigger names. Schelpe is a real talented artist who each time again finds new challenges and new ideas to experiment with. Previous albums revealed elements of electro-clash, electro-trance and triphop, but “Seven Sorrows, Seven stars” is already different.

The compositions excel in sound intelligence and sophistication. You quickly notice a true passion for creating great sound sculptures supported with cool studio effects. It mainly remains pretty pop-minded, but there are also some electronic ballads. Most of the tracks have  danceable-pop structures and carried with some retro-like synth parts.

I’m once more impressed for the great selection of singers and not only female ones. This album reveals several talented male singers and I especially refer to Roeland Van Der Velde who’s an impressive pop singer. I’m also impressed by the vocals production of David Chamberlin (Entrzelle) and Bernard Feron (Combat Unit). Among the female vocalists there again is the heavenly Kyoko Baertsoen (ex-Hooverphonic) and other familiar names like Miss FD and Mari Katmann.

The bonus disc of the limited edition is more into clubby vibes. We here get an impressive list of danceable and more techno-pop orientated remixes. Next to a few familiar names like People Theatre, Liquid Divine, Cutoff:Sky, VV303, Skyshifter (side-project of IC434) and Implant, Yves Schelpe again selected an interesting list of less familiar names, which are artists mainly active in different scenes.

+ + + : The new Psy’Aviah work excels in creative pop music and global sound intelligence while there’s an impressive list of talented singers. It all seems like Yves Schelpe has a nose to find the right singer for a song while a few singers are really excelling in charisma and grace. The bonus disc is absolutely worthy of examination as it reveals an impressive number of cool and clubby cuts.

– – – : The complexity of the work –and especially for pop driven music, is not the most accessible formula to seduce the average pop-lover. The regular album is missing a few more club-friendly songs.

Conclusion: I’m once more convinced that Yves Schelpe is was of the most underestimated musicians in this scene. His work is always carried by a true, innovative spirit and a fine taste for great sound treatments.