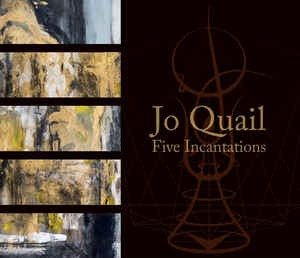 Background/Info: Jo Quail is an English cello player from London. I got the opportunity to discover her very first work (cf. “From The Sea”) released in 2010, on which she revealed a bewitching and melancholic cello playing. She also joined hands together with Matt Howden (Sieben) on the Rasp project. Jo Quail is back on track with new work featuring 5 new cuts meant as 5 incantations.

The work has been explained by the artist as ‘a suite of interlinked movements, each individual yet essentially drawn from one theme; each movement describes a personal reflection on one of the four cardinal points, with the fifth aspect being spirit’.

Content: “Five Incantations” invites the listener to embark on a journey of mysteries and fantasies. The sound universe of Jo Quail reveals a talented cello player who has the magic touch to let her instrument speak. The sound is filled with emotions, which once more are moving on melancholic paths.

Jo Quail puts a lot of dramatic passages in her work. It’s all meant as ‘incantations’, but some aggressive sequences and other chilling passages and low, dark vibes emerging from the strings will guide the listener into a fantasy. This is the kind of work appealing for your imagination. There’s a poignant cinematographic flavor emerging at the surface, which even reminds me of the impressive tune of Ennio Morricone’s “Man With A Harmonica” taken from the mythical movie “Once Upon A Time In The West”. Jo Quail did a similar experience with her cello. It’s a great artistic exposure of her work.

Jo Quail got some help from James Griffiths for the mixing and mastering.

+ + + : Jo Quail is simply playing her cello and is using a few effect pedals. She creates an impressive dark and melancholic atmosphere, which is also filled with reverie. “Five Incantations” stands for emotion and an impressive artistic exposure, which will appeal for fans of Sieben, Rome and related artists. I also have to mention the great and artistic artwork, which once more reflects the refined taste of this artist.

– – – : My only regret is the total absence of vocals. Some mystical kind of vocals or chants would have given an extra dimension to the work.

Conclusion: Jo Quail is one of those authentic artists deserving more recognition, but I’m sure she one day will get it. Her work reflects such a finesse and sensuality she can only, but become recognized for her talent. Respect!