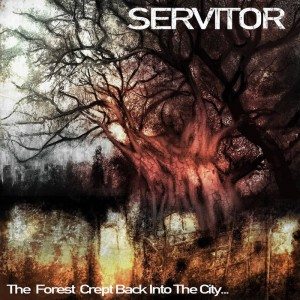 Background/Info: Behind Servitor is hiding Sean Malley, who is a percussionist, previously involved in iVardensphere. He’s already active as solo-artist for a couple of years now and I remember him from the album “The Marriage Of Earth And Iron”, which was released under the Servitor Sanctum 7 moniker (2010). Sean Malley strikes back with a new opus revealing 16 cuts.

Content: Servitor is a mainly inspired by tribal music inspired from very different places and cultures on earth. Percussions have been performed by multiple authentic instruments like djembes, snares, toms, tambourines, monkey drum ao. Next to the impressive arsenal of percussion Servitor also uses electronics and vocals. Sean Malley got the help of a few contributors to accomplish his work.

The electronic passages are often dealing with industrial influences while you also will notice ghost-like atmospheres. The vocals reinforce the ghost-like approach and are quite characteristic for this work. It makes me think to a kind of zombie growls awakened by the cadence of the percussion.

Another important aspect is the use of chants and choir fragments. I also have to mention the many kinds of Indian shouts, which are omnipresent. There sometimes is a kind of duality running through the work and that’s only accentuated by weird fragments of radio broadcasting in the background.

+ + + : Servitor clearly deals with a rather unique style and that was already a noticeable element on the previous work. The tribal element is absolutely great and we can affirm to hear a talented percussionist in action. The multiple and sometimes totally different cadences lead the listener into trance.

– – – : This is a weird production and I especially refer to the kind of Indian shouts emerging from nowhere. Some influences are not totally matching with oneother, but it for sure makes the originality of this project.

Conclusion: Sevitor will be for sure nominated to get an award for most creative underground formation, but it first of all is one of the most authentic tribal formations active at this scene. I can imagine this is the kind of band you’ve to see on stage.

Since you’re here … … we have a small favour to ask. More people are reading Side-Line Magazine than ever but advertising revenues across the media are falling fast. And unlike many news organisations, we haven’t put up a paywall – we want to keep our journalism as open as we can. So you can see why we need to ask for your help. Side-Line’s independent journalism takes a lot of time, money and hard work to produce. But we do it because we want to push the artists we like and who are equally fighting to survive. If everyone who reads our reporting, who likes it, helps fund it, our future would be much more secure. For as little as 5 US$, you can support Side-Line Magazine – and it only takes a minute. Thank you. The donations are safely powered by Paypal.
Tags: iVardensphere, Servitor