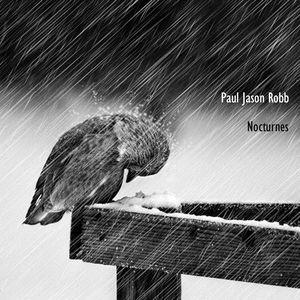 Content: Paul Robb is an American artist you might know from his involvement into the electro-pop formation Information Society while he also set up the label Hakatak International. He got involved in a few more bands while he’s also a producer.

On “Nocturnes” Robb reveals his hidden skills as an ambient compositor. The album has been announced as dark-ambient, which can’t be understood as the typical dark-ambient work that will give you this typical chilling sensation. This work is more into mysterious moods created by raw sound treatments.

It reveals a kind of raw organ (cf. “Nocturne #1”) for an imaginary dark mess whiles the upcoming cut (cf. “Nocturne #2) sounds more into sound exploration and experimentalism. You can hear a musician who transposes himself into a real sonic surgeon, composing and decomposing sounds with an imaginary scalpel.

We next move into a new dark requiem experience empowered by industrial noises while buzzing sound waves can be heard as well. Deep resonating sound waves are progressively coming over you like an abstract noise creation. Paul Robb seems to enjoy the experimental side of his creation, which definitely sounds miles away from Information Society. This music is an antidote to electro-pop, with sound emerging from a noise laboratory.

I like this experimental side, which totally emerges on “Nocturne #5”, which is one of the most mysterious pieces of the album. It’s a strange sonic creation, which confirms the great experimental skills of this composer. And this is not the ultimate surprise as “Nocturne #4” reveals a kind of whistling tone mixed with metallic, industrial sounds and a disturbing, low vibrating noise wave.

Conclusion: Paul Robb explores the hidden paths of ambient- and experimental music, which clearly appear to be a fascinating source of inspiration. This is nothing totally new although it sounds pretty visionary.