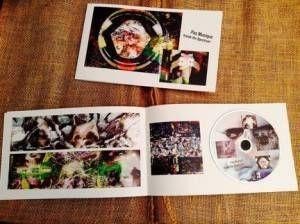 Content: Pas Musique started 20 years ago resulting from the creative brain of Robert L. Pepper. The band has mainly been active releasing albums during the past few years and we got the opportunity to discover the previous work “Abandoned Bird Egg” (2014), which was a weird, but interesting experiment reminding me of some famous pioneers in the genre.

“Inside The Spectrum” has been introduced as being inspired by space and philosophy. The transposition into music is a rather surreal idea as the name of the band has to be translated as ‘No Music’. So once again Pas Musique invites us to join imaginary ‘dada’-fields of music creation. This is not exactly about coherence rather than the creation of sounds and experimentation with the most diversified sources of noise. The title-song takes off opening with the sound of a bagpipe, but rapidly evolves into a sound labyrinth where you’ll have to find the little pieces creating a big sonic puzzle. Some kind of bewitching female vocals join to add some extra mysterious element to the track. I have to admit this is a rather successful beginning.

Quite progressively we’re moving towards chilling sound atmospheres mixed with pure experimental treatments and some passages driven by a slow rhythm. “Ancient Evil Aliens” is an interesting exposure holding on to its experimental basis, but still unleashing electronic loops and intriguing screaming-like vocals with an extra effect on top. We next move into more obscure sound paths, which are quite progressively becoming more experimental and decomposed.

I however become intrigued by the violin playing, which creates a kind of duality with the overwhelming sonic puzzle leading into a pure abstract creation. I can’t get away from the idea that most of the tracks have been accomplished by pure improvisation and that none of the Pas Musique tracks can ever be played the same. It remains a meaningful experimental voyage, which can serve as antidote to what we’re commonly calling ‘music’.

Conclusion: “Inside The Spectrum” makes me think of a sonic painting where the colors have been replaced by sounds and where the style is totally abstract and into modernism.