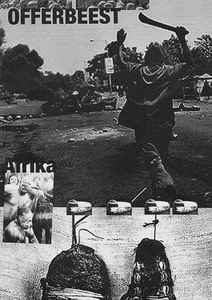 Background/Info: Behind Offerbeest is hiding Maurice De Jong, who’s an artist you know from his involvement in multiple projects, but especially Gnaw Their Tongues and Aderlating. Offerbeest previously released the “Black Teeth”-album on cassette- and digital format and now joined hands with Tumor/Malignant Records to unleash its debut CD.

Content: The least I can say is that “Afrika” is a very engaged album about all kind of atrocities that ever happened on the African continent… and, which unfortunately have never changed. It’s illustrated with several pictures and newspaper fragments in the booklet of 12 pages.

The music is meant to transpose this horror. You can see at the titles, but you also can feel certain rage emerging from the heavy sonic treatments and the arsenal of noises used by Offerbeest. The vocals are pretty ghost-like, but also revealing the feeling of anger like a wounded beast hunted by its aggressor.

+ + + : Offerbeest doesn’t sound that different from Maurice De Jong’s other projects; it has something different and rather unique, somewhat anarchistic in its approach. “Afrika” is revealing an impressive canvas of electronic treatments mixed with dark atmospheres. This album has something very disturbing, which is accentuated by the documentary-aspect of the booklet. “Afrika” is a poignant production, which can’t leave listeners unmoved.

– – – : “Afrika” features 7 songs, which will take you away for 31 minutes of sonic pleasure and political horror. I would have liked to get a few more cuts featured.

Conclusion: Offerbeest is the sonic symbiosis between multiple genres, which are all related to a higher conceptual goal; this is an album with a message!

Best songs: “Cut Out Their Hearts”, “Kill Everything In”.