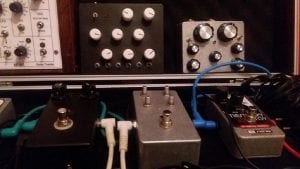 Maurice De Jong aka ‘Mories’ is a real prolific artist hailing from The Netherlands. He’s involved with numerous projects. Gnaw Their Tongues and Aderlating both are for sure some of his most renowned projects, but he also produced music as It Only Gets Worse, Caput Mortuum, Cloak Of Altering, De Magia Veterum, Hagetisse, Pyriphlegethon ao. Offerbeest is one of his newest sonic creations, which he started in 2017. He recently released the “Afrika”-album on Malignant Records. The work is an analogue creation dealing with hard-electronics and power-noise. Time for a brief introduction to the harsh world of Offerbeest.

Q: What incited you to set up Offerbeest and what makes this project different from all the other ones you’ve been involved with?

Maurice: I wanted to do music without using samples/computer/DAW. Just using analogue gear; limiting myself in a way. At the time I found that doing ambient/noise/drone (like Aderlating) with digital gear was just too easy, not a challenge anymore. I use my DAW as a recording device of course, but there is no editing or manipulation. I think Offerbeest is my most straight up industrial/power electronics project.

The focus lays on the rhythms, bass sounds, noise and ambient sounds. And of course spitting hatred into the mic.

Q: Tell us a bit more about your way of working and composing and how did the “Afrika-“CD came to life?

Q: Analogue gear takes an important part in your composing process. What makes the magic of analogue equipment and also the main differences with software equipment? Do you’ve favorite tools?

Maurice: There’s no magic imo. I just was fed up with using digital gear and samples creating drone/noise etc. I use both a lot, but for Offerbeest I made a conscious decision to only use analogue gear. My favorite tools are my Eurorack set up (mostly Doepfer modules) and my Hades bass synth.

Q: Considering the booklet and title of the tracks, “Afrika” appears to be an ‘engaged’ work. What did you try to express and do you consider yourself as an ‘engaged/reactional’ artist?

Maurice: No engagement. No expression. No reaction. Just trancy numbness. People need to make their own minds up about the music and themes. I have been interested in the more gruesome side of the continent since I was a kid.

Q: The debut work of Offerbeest has been released on cassette format. I noticed there’s a kind of resurrection from the cassette format going on. How do you explain this evolution and do you as an artist have favorite formats?

Maurice: Cassettes are cheap and quick to produce. It’s indeed weird to see how many new cassettes I buy/get/own. I have no favorite format. Vinyl is always nice though.. but I mostly enjoy music the most regardless of the format. If I have the physical format I will play that over a digital stream.

Since you’re here … … we have a small favour to ask. More people are reading Side-Line Magazine than ever but advertising revenues across the media are falling fast. And unlike many news organisations, we haven’t put up a paywall – we want to keep our journalism as open as we can. So you can see why we need to ask for your help. Side-Line’s independent journalism takes a lot of time, money and hard work to produce. But we do it because we want to push the artists we like and who are equally fighting to survive. If everyone who reads our reporting, who likes it, helps fund it, our future would be much more secure. For as little as 5 US$, you can support Side-Line Magazine – and it only takes a minute. Thank you. The donations are safely powered by Paypal.
Tags: Aderlating, Offerbeest