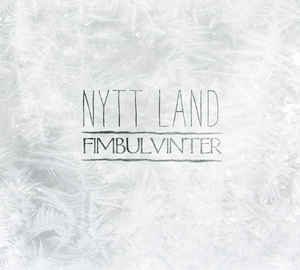 Background/Info: Nytt Land is a Russian group, which has released several albums in a rather short lapse of time. They became interested in Northern ritual music, using a lot of self-made and authentic instruments while getting inspired by the Poetic Edda (old Norse poems). “Fimbulvinter” is their debut work on Cold Spring Records and definitely a way to get a wider recognition.

Content: One of the main characteristics of the work is the use of Old Islandic vocals. It immediately creates a link with famous series such as “Game Of Thrones” and “Vikings”. Male and female vocals alternate, but the female vocals are dominant and an essential element in the band’s composition.

The music has a very own approach by the use of mainly authentic instruments. Flutes, taglharpe, word percussion, kantele, tin whistle and drums are just a few instruments used by the band injecting this unique sound color. Together with the vocals it creates a deep and meaningful ritual style.

+ + + : I like creative bands although I’m not saying Nytt Land has invented a new style of music. But the global approach and the use of instruments creating a particular ritual atmosphere is absolutely amazing. The bewitching female vocals and the unique somewhat deep-throated male vocals inject an extra ritual dimension to the work. You really get the impression to watch an imaginary series dealing with ancient rites. There’s a strong visual appeal emerging from the tracks. This work features 12 songs and there’s not a single cut to throw away.

– – – : The single minus point I can imagine is that after a while the songs start to become a little bit similar with each other.

Conclusion: This is an album filled with magic getting the listener into a state of worship. This is also the kind of ritual music injecting a refreshing breeze to the usual standards of dark-ambient and related music genres. This will be for sure one of my favorite albums of the year!