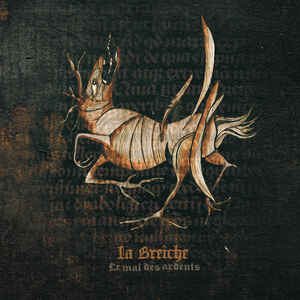 Content: The album reveals multiple influences, moving from pure medieval-like spheres to industrial sounds to ambient passages. You get the impression of listening to modern troubadours, which also reveals the visual strength of this work.

The music has been composed by the use of multiple traditional instruments such as hurdy gurdy, percussions, gongs, flutes, organ, harmonium ao. It injects an authentic character to the work. The vocals match with this medieval/folk atmosphere, but can become deeper and darker as well. I even noticed a more ritual way of singing, which here again creates a perfect twist with the music.

+ + + : I’m always fond of ‘authentic’ bands, showing a real love and passion for instruments. The sound becomes more pure and magical. La Breiche hasn’t created a new music genre, but they mixed some elements of Stille Volk with darker and industrial influences. The ritual touch emerging from a few cuts is also a great element of the work. But I first of all like the imagery emerging from the songs, which bring us back to medieval visions.

– – – : There also is a more experimental flavor hanging over the album, which is not exactly my favorite. I’m also referring to fragmented vocal parts. The album features an impressive canvas of influences and it sometimes becomes a kind of mishmash.

Conclusion: La Breiche is an interesting newcomer at the Cold Spring roster. The French duo holds on to the dark and experimental side of the label, but enlarges the sonic horizon with some grace.