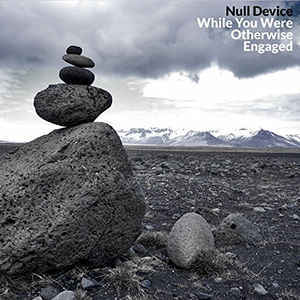 Background/Info: American formation Null Device has already been active for more than 20 years now. They became one of the flag holders of Nilaihah Records, but since this label seems to have disappeared from our radar, Null Device finally joined hands together with Distortion Productions to unleash their official sixth full length album.

Content: Null Device never has been a stereotypical electro-pop formation, but uses influences they next mixed with more personal and eclectic sources of inspiration. This new opus is filled with reverie passages, but still with some retro-pop elements and even danceable groovy-pop parts. You also will notice their familiar Oriental sound elements, which sounds like bringing different music cultures together.

The songs have once again been accomplished by the use of electronic gear and authentic instruments like violin and cello.

+ + + : I especially like the authenticity running throughout the composition of Null Device. This band is not into clichés, but just likes from time to time to bring a little wink to some familiar and vintage like electro-pop music. “The Desire” is a noticeable song in the genre featuring original lyrics and a sound that reminds me a bit of Pet Shop Boys. On the other hand they also excel in the writing of great and somewhat mystic music (cf. “Concentric”) and happy, groovy pop sequences (cf. “All Along This Line”). I also have to mention the sad reverie running through “Shadow And Flame”. Last, but not least I have to say a word about the real professional and mature sound production this album has been accomplished with.

– – – : My only regret about this work is the absence of a kind of potential absolute hit. There are several cool songs, but maybe not that potential hit pushing this album into the spotlight.

Conclusion: “While You Were Otherwise Engaged” is a styled and artistic composition revealing creative pop-inspired songs. This is music you now can dance to and then start to dream with.