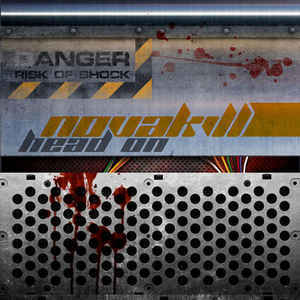 Background/Info: The Australian duo Novakill struck back earlier this year with their new album “Danger”, which also was the first opus in 7 years. The title song of this EP was originally released on the album. Next to the album version, this EP reveals a ‘reconstructed’ version and two new songs.

Content: “Head On” wasn’t my personal favorite song on the album although it remains a cool EBM song recovered with dark, buzzing synths and typical ‘body-music vibes’. I don’t notice that much differences between the original- and alternative mix, which both remind me of the 90s EBM spirit.

The new songs are nothing more than B-side cuts. We first get a more electro-industrial experiment while the other cut is more moody and revealing dark string parts and a few spoken samplings. Both cuts are instrumentals.

+ + + : Novakill is not exactly the most famous and popular EBM name, but that’s maybe because they aren’t that known in Europe. They however deal with a somewhat ‘old-styled’ inspiration resulting in an efficient sound. “Head On” is a kicking song in the genre. I especially like the dark element running through their work.

– – – : You can always discuss the choice of a title song and speaking for myself I remember more efficient album songs then “Head On”. I’m not disappointed with this track, but I especially expected a bit more out of the new songs, which clearly sounds like release-fillers. Remixes by other groups would have been a better option here.

Conclusion: This EP features a cool title song, but unfortunately less interesting B-side cuts. If you don’t know the last album of Novakill, the song “Head On” will maybe convince you to put your hands on it.