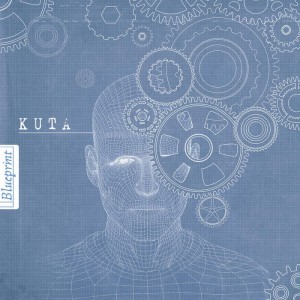 Background/Info: “Blueprint” marks the return of Kuta. It’s the fourth full length album from Sébastien Pietrapiana (ex-Corpus Delicti, ex-Press Gang Metropol). After nine years of silence Kuta is now back on track releasing its first album on M-Tronic. Kuta is a solo-project with the contribution of some ‘friends’.

Content: There are (only) nine songs on this album, but it sounds like a very versatile opus. The main basis remains electro- & indie-pop music, but you’ll also notice a kind of melancholic ballad style, pure reverie passages, which are more into a kind of soundtrack music and a surprising cover version of Cyndi Lauper “Time After Time”. Notice by the way that the album is also available on vinyl format.

“Blueprint” clearly sounds inspired by the 80s new-wave and pop music, and also by David Bowie. Some vocal parts might remind you of Wolfsheim.

+ + + : The opening song “Take On You” is a real fantastic piece with an elevating chorus. There’s a real symbiosis between subtle electronics and guitar. The last song “All The Limits” is quite similar and another attention grabber. I also enjoyed the indie-minded “Catch It When It’s There” and the evasive “Shine Like Satellites”, which is a beautiful song.

– – – : The few ballad-orientated songs can’t really convince me. They have this melancholic touch, which rapidly starts to get a bit monotonous because there’s no real climax in these songs. The cover version of Cyndi Lauper can be fun when played live, but not exactly the best shot from this opus.

Conclusion: “Blueprint” is a quite accessible and diverse piece of work mixing a few real highlights with a few forgettable songs.

Best songs: “Shine Like Satellites”, “Catch It When It’s There”, “Take On You”.