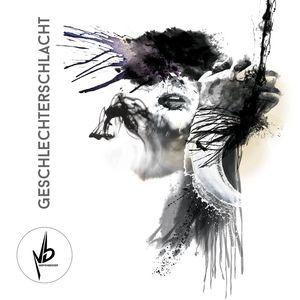 Content: Nervenbeisser is a German band set up by Olaf Seider. I’m sure it will be hard to keep the title of the album in mind for non-Germans, but I can assure you “Geschlechterschlacht” is worthy of examination. This is a rather surprising work as it concerns a re-release of an album that was originally released in 2004 by ZYX-Music. So this is an opportunity to (re)discover this somewhat forgotten album.

Olaf Seider mixes interesting influences together, which sound a bit like an offspring between Rammstein and The Prodigy. It’s a strange and powerful hybrid driven by energetic and often breakbeat-minded beats while the furious guitar playing reveals the metal inspiration. The global production is achieved by great electronic treatments. The electronic element of the work also is a main aspect and not just a detail. All those elements together create an explosive fusion, which you can hear in several songs.

“Feuerteufel” is without a shadow of a doubt, my favorite. It sounds like it symbolizes an ultimate symbiosis between the different sources of inspiration while it will maybe appeal to fans of Rammstein. I think there’s no better song than “Feuerteufel” to get an idea about the sound creation of Nervenbeisser. I also have to mention songs like “Genug Ist Genug” and “Prinz Der Nacht”. The last mentioned track also reveals a great harmony between the rough male vocals and female backings reminding me a bit of Jade 4U (Praga Khan). The female vocals inject a kind of sexy, but sterile touch.

This album clearly evokes the influence of Rammstein, but “Geschlechterschlacht” sounds sexier because of its rhythmic and electronic arrangements.

Conclusion: This album is a real nice surprise, which in my opinion has the potential to appeal to a wider audience than only German speaking fans. The main basis of the work is inspired by familiar influences, but mixed together to get a refreshing sound.

Since you’re here … … we have a small favour to ask. More people are reading Side-Line Magazine than ever but advertising revenues across the media are falling fast. And unlike many news organisations, we haven’t put up a paywall – we want to keep our journalism as open as we can. So you can see why we need to ask for your help. Side-Line’s independent journalism takes a lot of time, money and hard work to produce. But we do it because we want to push the artists we like and who are equally fighting to survive. If everyone who reads our reporting, who likes it, helps fund it, our future would be much more secure. For as little as 5 US$, you can support Side-Line Magazine – and it only takes a minute. Thank you. The donations are safely powered by Paypal.
Tags: Nervenbeisser