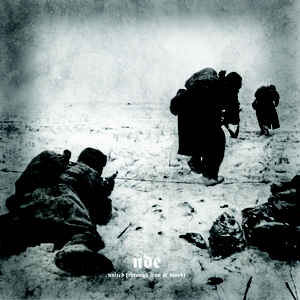 Background/Info: “United” marks the return of the Belgian duo Bart Piette (Dead Man’s Hill) and Koen Osier aka ‘Mürnau’. They don’t release new work on regular basis and we had to wait 6 years to welcome this third opus while the first one got released in 2009.

Content: The complete title of this album is “United – Through Iron & Blood”. The opus features 9 untitled cuts inviting the listener to endure a harsh and merciless composition. The tracks stand for total power carried by a frenetic cadences and multiple noise treatments. On top of it all you’ll hear heavy screams accentuating the death-industrial approach of “United”.

+ + + : The rhythmic-noise element is a quite important element of this work. It has been mixed with countless noise manipulations and other electronic treatments. NDE creates a sonic mayhem, which can be seen as a reference in the genre. This album reaches an ultimate degree of harshness and power at several cuts, but you clearly from start on will be caught by the intensity and sonic violence of this work.

– – – : The sound formula becomes quite predictable after a  while and that’s probably why I experienced the final part of the work as becoming a bit repetitive.

Since you’re here … … we have a small favour to ask. More people are reading Side-Line Magazine than ever but advertising revenues across the media are falling fast. And unlike many news organisations, we haven’t put up a paywall – we want to keep our journalism as open as we can. So you can see why we need to ask for your help. Side-Line’s independent journalism takes a lot of time, money and hard work to produce. But we do it because we want to push the artists we like and who are equally fighting to survive. If everyone who reads our reporting, who likes it, helps fund it, our future would be much more secure. For as little as 5 US$, you can support Side-Line Magazine – and it only takes a minute. Thank you. The donations are safely powered by Paypal.
Tags: Mayhem, NDE