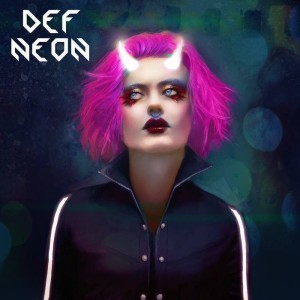 Background/Info: The British duo consisting of Emily (vocals & bass guitar) and
Mickey (guitar & electronics) was set up in 2010 and first dealt with guitar- and rock music. They progressively added electronics into their work, which brought them to join AnalogueTrash Records. This self-titled debut album features 10 songs.

Content: Def Neon sounds like the offspring between punk and pop music. Next to solid guitar playing, the sound has been accomplished by furious electronic treatments. They really took care to create terrific electronic manipulations.

Emily’s vocals are more into a sweet format, which injects this pop-feeling. “Def Neon” reveals a nice contrast between guitar and electronics and at the same time it all sounds like a divine fusion in sound and influences. The songs are constantly moving from more rock orientated passages towards pop elements, but in the end it remains animated by a kind of naughty punk-pop sound.

+ + + : The main force of this work for sure is the creative exposure great electronic sound treatments and hard guitar riffs. Emily’s sweet timbre of voice injects an angelic touch to the work. Def Neon doesn’t really care about established music genres and simply creates their own style of music as an offspring between different influences. That’s why it also sounds a bit indie-like, making “Def Neon” pretty accessible for a wider audience.

– – – : “Def Neon” sounds a bit like a challenge. The sound is accessible, but hard to range in one established genre. I noticed a few songs without a real apotheosis and that’s especially true for the second part of the album.

Conclusion: ‘Punk is not death’ is an old slogan, which has been reinvented by Def Neon. They’re the punks of the 21st Century and “Def Neon” will give you a great shock!

Since you’re here … … we have a small favour to ask. More people are reading Side-Line Magazine than ever but advertising revenues across the media are falling fast. And unlike many news organisations, we haven’t put up a paywall – we want to keep our journalism as open as we can. So you can see why we need to ask for your help. Side-Line’s independent journalism takes a lot of time, money and hard work to produce. But we do it because we want to push the artists we like and who are equally fighting to survive. If everyone who reads our reporting, who likes it, helps fund it, our future would be much more secure. For as little as 5 US$, you can support Side-Line Magazine – and it only takes a minute. Thank you. The donations are safely powered by Paypal.
Tags: AnalogueTrash, Def Neon