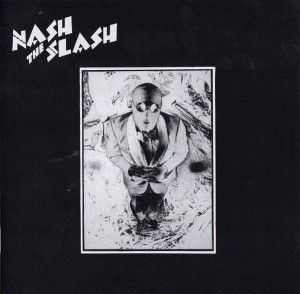 Background/Info: Nash The Slash (aka Jeff Plewman) is a kind of Canadian legend. He definitely belongs to the pioneers of electronic music and became an influential artist who worked with great names. This multi-instrumentalist was also member of the band FM. He did noticeable live performances with surgical bandages around his head. He also composed music for silent films. Nash The Slash was a real phenomenon who unfortunately passed away in 2014 at the age of 66.

Content: “Dreams And Nightmares” was clearly inspired by experimental music composed with multiple instruments. There’s a cool 80s flavor emerging from the old rhythm box and synthesizers. The songs remain instrumental versions, which made it all sounds experimental, abstract and still a bit soundtrack-like. The guitar was an important instrument that injected great 80s influences as well (sometimes reminding me of Snowy Red), but with a psychedelic touch. This album is something really special and a great testimony from the early work of this artist.

The 2nd disc featuring songs taken from the 12” vinyl “Bedside Companion” reveals similar influences. There’s this unique fusion between early electronic experiments, psychedelic music and pure soundtrack experiences. It’s electronic and psychedelic rock at the same time. Some cuts are pretty cold while others are carried by intriguing atmospheres. The 4 original songs have also been featured in their “Mardsen Version” format. This is a totally weird experimental format, with the songs being played at a lower speed. It creates a kind of lazy and extended versions.

+ + + : If you like good-old experimental music, this is an album that will bring good-old memories to life. I like the album’s diversity.

– – – : Experimental music is not always that accessible and that’s precisely what I experienced on a few cuts, especially on the “Mardsen Version”-mixes of “Bedside Companion”.

Conclusion: This work has to be seen as a homage to a great and visionary artist, but it’s mainly a great sonic documentary.