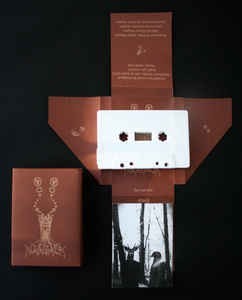 Background/Info: Naagauk has been set up as a duo and is hailing from The Netherlands. They’ve been joined by a drummer and have released their debut-work “Naagauk” on cassette format. It’s a strictly limited edition of 65 copies although the work is digitally available as well.

Content: The band has been introduced as a black-metal duo, which for sure is an appropriated description when it comes to the main influences of the band. They however explore wider sonic fields resulting in the addition of an industrial sound and some elements of punk as well.

The work is characterized by it devilish and merciless cadence, which for sure is one of the hottest metal influences running through the work. On top of it all you get the screaming vocals of ‘Haask’ (also member of Skymme). He’s really acting like a possessed soul, which totally matches with the steaming rhythm and the aggressive guitar playing.

+ + + : Naagauk is much more than simply black-metal music and I enjoyed their open-minded vision on music. This is the kind of work that will appeal for lovers of industrial- and post-punk music as well.

– – – : The cassette features 4 songs and I clearly notice a difference between the heavier and mind-blowing cuts from the A-side and the somewhat softer pieces from the B-side. I clearly prefer their steaming and annihilating approach while the kind of final outro-song is missing some consistency.

Conclusion: Whatever the genre you would like to label Naagauk, this band is driven by hard-core and inspired by violent music formats. This is sonic terrorism and you know what, people are going to like it!