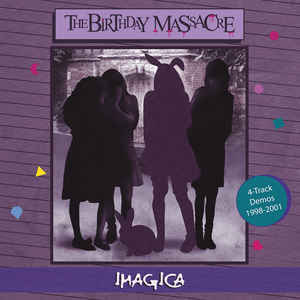 Background/Info: The title of this new album has been named after the original band name Imagica. Imagica was active between 1999 and 2002. This album is a kind of look back to the early years featuring remastered songs from the Imagica-period, but you also will discover a few familiar songs that got later on released on The Birthday Massacre’s debut album “Nothing And Nowhere” and even two cover versions.

Content: The style and influences of the early years of the band are easily recognizable. The songs are made of elements like gothic, rock and electronics while carried by the heavenly and alluring vocals of their front woman Chibi.

The songs switch in between heavy, merciless outbreaks and moody pieces filled with some melancholia. The guitar playing remains another essential aspect, which can be furious now and a bit psychedelic at times. I also noticed vague shoegaze elements. The electronic arrangements add a more accessible pop touch, and also brings refinement to the global production.

The work also reveals two cover versions and here again The Birthday Massacre mixes opposites styles. First there’s a quite well-crafted cover of Madonna’s “Open Your Heart” followed by a cover version of Faith No More’s “From Out Of Nowhere”.

+ + + : This album is an interesting documentary revealing the first steps of a band that would rapidly reach the top of the underground scene. The sound formula has never really changed throughout the years, but remains a magic elixir merging different influences together. There’s a perfect harmony between faster and furious cuts on one hand and more fragile and melancholic dark-pop cuts on the other hand. “Imagica” sounds powerful and dreamy while carried by the unique vocals of their singer. The cover version of Madonna is absolutely cool like the transposition of a teenager pop-song into a dark and naughty goth-pop adaptation.

– – – : This is probably not the work that will enter into history as their best album ever. This is a more a kind of ‘fan-item’ to complete your discography.

Conclusion: If black is for sure symbolizing darkness, purple definitely will be always linked to The Birthday Massacre, with a flavor of melancholia. That’s precisely what “Imagica” all sounds like; a kind of nostalgia for the early years when the band was called Imagica.

Best songs: “Nothing and Nowhere”, “Over”, “The Birthday Massacre”, “Open Your Heart”.

Since you’re here … … we have a small favour to ask. More people are reading Side-Line Magazine than ever but advertising revenues across the media are falling fast. And unlike many news organisations, we haven’t put up a paywall – we want to keep our journalism as open as we can. So you can see why we need to ask for your help. Side-Line’s independent journalism takes a lot of time, money and hard work to produce. But we do it because we want to push the artists we like and who are equally fighting to survive. If everyone who reads our reporting, who likes it, helps fund it, our future would be much more secure. For as little as 5 US$, you can support Side-Line Magazine – and it only takes a minute. Thank you. The donations are safely powered by Paypal.
Tags: Imagica, The Birthday Massacre