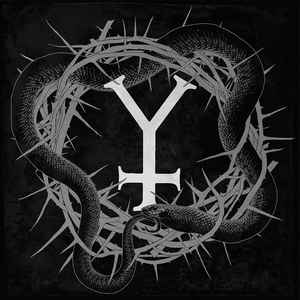 Background/Info: MZ.412 was set up by Henrik Nordvargr Björkk in 1988. So this project is celebrating its 30th anniversary and will release a new full length later on this year. This 10” featuring 3 cuts is taken and adapted from this forthcoming opus (entitled “Svartmyrkr”). Notice by the way the vinyl is available in 3 different edits.

Content: The 3 tracks are pretty different from each other. The opening piece is a heavy fusion between martial-, dark-ambient and industrial music. The next piece is more into drones while featuring spooky voices.

The B-side cut features Tomas Pettersson (Ordo Rosarius Equilibrio). This is the most elaborated cut, which is mainly driven by industrial elements and cold, spoken vocal parts.

+ + + : MZ.412 remains a truly reference in a music genre they’re still considered to have invented. I don’t care about definitions and especially when a work featuring only 3 cuts is that diversified. But the strength of Henrik Nordvargr Björkk always is to remain focused on the project he’s working on. So you can notice typical arrangements and oppressive atmospheres recovering all the tracks and, which are that typical for MZ.412. I remain a great admirer of his creation, mixing industrial, drones and ambient music.

– – – : I don’t see real minus points about this release except we still have to remain patient awaiting the new album.

Conclusion: MZ.412 has created its own sound, which once again takes us back to an imaginary, obscure universe. It always is an obscure travel, which in the end makes you feel comfortable. Hell is waiting and it clearly looks as a sweet perspective…

Since you’re here … … we have a small favour to ask. More people are reading Side-Line Magazine than ever but advertising revenues across the media are falling fast. And unlike many news organisations, we haven’t put up a paywall – we want to keep our journalism as open as we can. So you can see why we need to ask for your help. Side-Line’s independent journalism takes a lot of time, money and hard work to produce. But we do it because we want to push the artists we like and who are equally fighting to survive. If everyone who reads our reporting, who likes it, helps fund it, our future would be much more secure. For as little as 5 US$, you can support Side-Line Magazine – and it only takes a minute. Thank you. The donations are safely powered by Paypal.
Tags: MZ. 412, Nordvargr