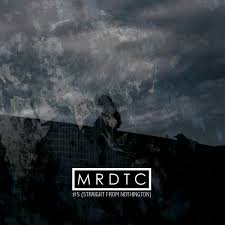 Content: Christoph Lemke aka Mr. Dupont (also active in NordarR) and singer Tino Claus (active in bands like Amnistia, Neukampf) are back on track with a new full length of pure EBM.
MRDTC is a quite prolific band having released several productions in just a few years. They became a rather established and recognized act from the Emmo.biz roster and now strike back with their newest opus –which is available in a limited collector’s edition featuring an extra disc.

The duo deals with a rather familiar EBM format, which reminds me of some 90s bands in the genre. Some bombastic ingredients and a few bass lines remind me a bit of the early work of Pouppée Fabrikk, but the sound is a little less softer. “Straight From Nothington” is rather diversified, but still a compact and cohesive work. The compositions are not into the simplistic EBM fields, but elaborated with some extra sounds and treatments. I refer to the scratching sounds running through “Falling” or the somewhat Front 242-sounding “When The World Is Gone”. There also is the more into industrial-body sounding “Hexited” which is featuring NSBTM (No Sleep By The Machine). Both bands seem to like each other as the last song also features NSBTM. “Watcher” is a cool cut, which reminds me to the early style of Portion Control.

The diversity comes also through in the production of the vocals. Most of the vocals are powerful and filled with testosterone, but a few songs have been sung a softer and somewhat whispering way. Both styles are cool and fit with the music.

The extra disc “The Converted Killer”, features two unreleased songs plus a cover version and different remixes. The ‘new’ songs are a bit different from the usual stuff of MRDTC. They experiment with atmospheric passages, which are carried by some EBM elements. I can’t say that I’m totally fond of these tracks, but a bonus disc is just fine to discover another side of the band. In a different way there’s a rather pop-like cover of Mrs. June’s “When The World Is Gone”.

We next get multiple remixes by bands like Basementgrrr, Nullvektor, DSX, Full Contact 69 and Amnistia. I especially love the remix of “Brain Talk” by Basementgrrr transforming the original sounds into a cool and intelligent format. DSX did a cool job as well, transforming “Straight From Nothington” into an old-school EBM version.

Last, but not least this bonus disc features two more songs together with NSBTM. But we now get two original songs of the Swedish band (cf. “Splice” and “Close”) featuring MRDTC. I like both of the song for their rather soft, but icy-like and old-school style.

Conclusion: MRDTC more and more reveals to be a band with real EBM potential and a rather diversified approach in composing body music. The main album is cool while the bonus disc will bring you a few cool surprises.