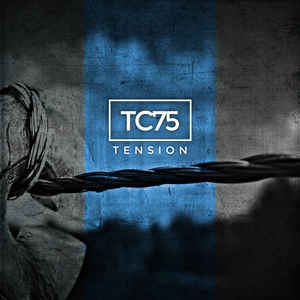 Background/Info: TC75 is the solo-project of Tino Claus (MRDTC, Amnistia). After a few EP’s released on 9XO Media TC75 joined hands together with the Russian Razgrom Music label to unleash this album featuring 10 tracks.

Content: Tino Claus remains faithful to the EBM influences he already deals with on Amnistia and MRDTC, but his solo-work is more minimal and personal-like. The song “Forge Ahead” perfectly illustrates the simple, but intelligent approach. Most of the cuts are ‘soft’, driven by slow rhythms and simple structures. A few harder cuts featuring some industrial sounds bring diversity to the tracklist. The last song is a long-duration, repetitive and atmospheric creation from more than 20 minutes.

+ + + : I’ve always like a minimal approach in EBM. Tino Claus has accomplished a few cool cuts, but I especially refer to “Forge Ahead”, which is an absolute masterpiece made with brilliant sound treatments. The global production reveals a retro-touch and haunting sound atmospheres sometimes reminding to Belgian electronic artists. The somewhat harder cuts bring extra variation and definitely belong to the most noticeable cuts of the work.

– – – : Some songs are maybe a little bit too simple, like suffering from a lack of elaboration. The last song, which also is the title track is too long in duration. I don’t have anything against long and elaborated ‘ambient’ pieces, but “Tension” is too repetitive.

Conclusion: I have a double feeling with this album; there are a few great ideas and songs at one side, but still a few less inspired cuts on the other side. I however think TC75 is an interesting project for its different approach so I’m really looking forward to see how this artist will evolve.