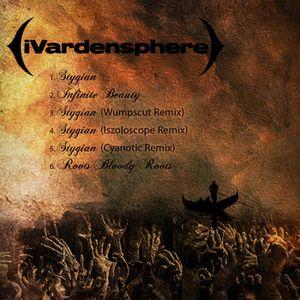 Content: “Stygian” is the next EP taken from the last full length album (cf. “Fable”) of iVardensphere. To be honest I didn’t exactly expect “Stygian” as title song of an EP as I think it’s not exactly the most representative song of the Canadians.

But on the other side “Fable” still was one of their most diversified opuses ever, which might explain this choice. “Stygian” also was one of the heaviest cuts of the album because of its unusual Ministry-load.

Next to the ‘original’ version, which remains a terrific exposure of power and industrial-rock-body music -carried by furious guitar sounds and driven through a possessed singer, we get 3 remixes. I like the remix by Wumpscut, which is more into the intimate and somewhat atmospheric style of Rudy R.

Iszoloscope transformed the song into a harder outburst characterized by remarkable sound treatments. I like the balance between the harsh electronics and guitar sounds on this remix. Cyanotic tried to remix it a more electronic way and here again I can speak about a rather accomplished version.

We next get a pure B-side song (cf. “Infinite Beauty”), which is more a kind of ambient and somewhat cinematographic try-out and a cover version of Sepultura’s “Roots Bloody Roots”. As I’m not exactly a fan of Sepultura I will not try to compare both versions, but the cover remains pretty metal-addicted, which once more confirm the growing eclecticism of iVardensphere.

Conclusion: “Stygian” definitely is one of the hardest and most crossover songs of iVardensphere ever. I’m still preferring a lot of other songs from the “Fable”-album, but this EP might catch the attention of a wider audience.