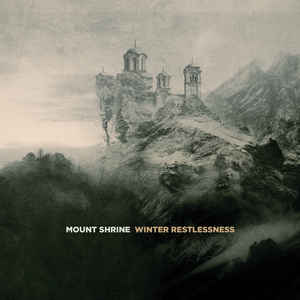 Background/Info: When evoking Rio De Janeiro we all imagine the beach, sexy girls, carnival and other exotic images. But from now on there also is Mount Shrine, which has released its official debut album on Cryo Chamber.

Content: “Winter Restlessness” sounds as a dark abyssal exploration. Low, vibrating sound waves and multiple little noises –you especially will notice by using headphones, are creating this obscure and yet prosper universe.

+ + + : “Winter Restlessness” doesn’t bring that much new, but it however is a fascinating exploration throughout imaginary dark worlds. There’s a strong visual aspect emerging from the music. I was mainly impressed by the wide sound canvas featuring a countless number of little, crispy noises and other sound effects. It makes me think to a microscopic composition, which never stops to take the listener by surprise.

– – – : The single minus aspect might be the somewhat monotonous songwriting. There’s not that much diversity running through the work.

Conclusion: This opus is a beautiful voyage through out obscurity; darkness can also has something gentle and prosper. This is an interesting new comer!