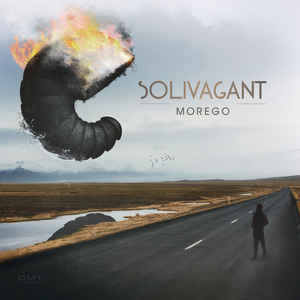 Background/Info: Set up in 2009, Morego is the project of Iranian artist ‘Morego Dimmer’ who gained some recognition with his dark-ambient project Xerxes The Dark while he’s still involved with other projects such as Nyctalllz, Ostanes, Nahan, Blind Owl ao. “Solivagant” is the second album from Morego.

Content: Morego invites the listener to visit a sonic canvas made of electro-ambient atmospheres, slow rhythms and broken beats, cinematographic passages and intelligent sound treatments. The work is quite diversified and characterized by an intelligent sound approach.

+ + + : I like the diversity of this album and especially the more IDM-driven cuts such as “Petrichor” and “Ascension”. Both cuts reflect a great sound intelligence, but I also enjoyed the progression running through the tracks. It moves to a crescendo till an imaginary sound climax. This album has something delicate and subtle. I refer to the astral-like piano play running through “Clairvoyance” and refined arrangements of the opening cut “Exordium”.

– – – : The tracks are pretty short and that’s sometimes a pity as I would like to hear some cuts in an extended version. I think it could have been cool as well to add now and then a few chants or spoken samplings.

Conclusion: Morego Dimmer is an artist from many talents and this project is an intimate and nice surprise.