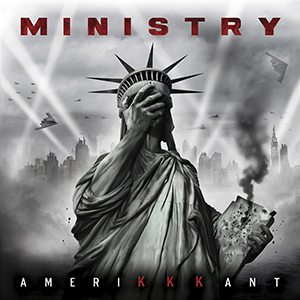 Background/Info: Studio album number 14 for the pioneer of industrial-metal mastermind Al Jourgensen, an artist who doesn’t need an introduction. The first album since long without any riffs from Mike Scaccia (RIP) on it.

Content: We are definitely not used to hear scratching (by DJ Swamp and Arabian Prince) and beautiful strings (by Lord Of The Cello) in a cinematic style on a Ministry album, which is the case for opener “I Know Words”, a sarcastic ode to President Donald Trump. Because of the length and the downtempo speed “Twilight Zone” (including Al on harmonica) should have been fitting well as one of the last tracks. It reminded me a bit on “Khyber Pass” from the “Rio Grande” album. It’s only at the outro of track 3, “Victims Of A Clown”, that Ministry finally pulls up the speed as we are used to hear from them on their last albums. “TV5/4Chan” is in the same style as “WTV” (from “Houses Of The Molé”), a mixture of guitar riffs and chaotic samples including shocking stuff like “… all you got to be is white in America and you get whatever you want!”. And then it’s finally time for some headbanging on the uptempo trash-metal of “We’re Tired Of It”, with Burton C. Bell (Fear Factory) on vocals followed by “Wargasm”, which reminded me vocally a bit of “Lay Lady Lay” (from “Filth Pig”). “Antifa” was the first released single and videoclip about the antifascist movement while “Game Over” is just like “Twilight Zone” a downtempo song with a repeating guitar-hook and middle-eastern style melody. On the last song “AmeriKKKa”, the singing style of Al reminded me a bit of Marilyn Manson.

+ + + : The violins on the first track accentuate in a nice way the sadness of the current (Trump-)era we’re living in. The sampling done by Al & Liz is amazing and the (additional) vocals of Burton C. Bell are definitely a positive thing!

– – – : Not much uptempo stuff this time and no less than 3 compelling songs are longer than 8 minutes which might be just a bit too long for some people.

Conclusion: This album is full of impressive sampling and is very well produced! Definitely an album you have to listen to more than once before you start to appreciate the songs, although not much new is presented. Respect for Al that he keeps protesting in his way against the current government.

Since you’re here … … we have a small favour to ask. More people are reading Side-Line Magazine than ever but advertising revenues across the media are falling fast. And unlike many news organisations, we haven’t put up a paywall – we want to keep our journalism as open as we can. So you can see why we need to ask for your help. Side-Line’s independent journalism takes a lot of time, money and hard work to produce. But we do it because we want to push the artists we like and who are equally fighting to survive. If everyone who reads our reporting, who likes it, helps fund it, our future would be much more secure. For as little as 5 US$, you can support Side-Line Magazine – and it only takes a minute. Thank you. The donations are safely powered by Paypal.
Tags: Al Jourgensen, amerikkkant, industrial-metal, Ministry, nuclear blast