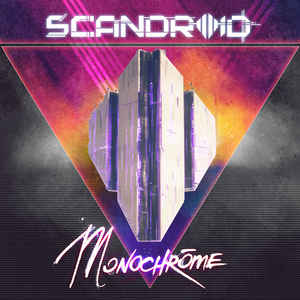 Background/Info: “Monochrome” is the second album by Scandroid, one of Celldweller’s side-project. Scandroid has been set up as a love letter from Klayton to the 80s. After the great self-titled debut album “Monochrome” reveals 13 songs (available on CD, vinyl, digital and even cassette format).

Content: The sound remains a faithful and totally vintage electro-pop ode to the 80s. The analogue equipment and some robotic vocals directly awake the 80s spirit. Some of the astral sound treatments even remind me to J.M. Jarre while other and more pop-driven cuts might appeal for fans of Duran Duran. Scandroid also likes cover versions and now has covered one of the biggest 80s hits (cf. “Thriller”) in history, which brings us closer to disco and pop.

+ + + : If you’re fond of pure 80s music, there’s no better contemporary artist than Scandroid to satisfy your needs. It’s pure vintage like, but it definitely sounds like having been composed and produced in the 80s. The songs are well-crafted and carried by impressive melody lines, which is one of this artist’s main trademarks. The cover version of Michael Jackson sounds pretty cool although it’s not my favorite song.

– – – : From a very personal point of view, I regret a too commercial sound approach in some songs, but at the other hand it’s an ode to the 80s and so there was much more than simply new-wave and electro-pop.

Conclusion: “Monochrome” is an imaginary time shuttle getting us back to the golden 80s era. Klayton is a talented and recognized contemporary ambassador from that decade so you’ll be not disappointed travelling with him throughout the 80s.