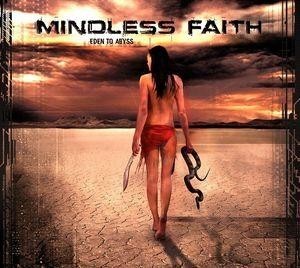 Content: The brothers Chris and Jason Sevanick are back on track unleashing the 6th full length of Mindless Faith. I always have liked this band for its powerful sound and intelligent however somewhat complex arrangements, which often remind me of Canadian pioneers of EBM.

The band is not exactly releasing productions on a regular basis, but the least I can say is that they’re more dealing with quality instead of quantity. “Eden To Abyss” surpassed all expectations as it’s a pure masterpiece reflecting maturity, intelligence in writing and arrangements plus a creative outburst for the use of multiple influences.

The opening track is somewhat intriguing for the dark atmosphere that evolves in to pure electronic mayhem carried by rough vocals. “Shit Show” coming up next is an absolute masterpiece carried by overwhelming electronics empowered by guitar parts and a perfect match between rough male vocals and angelic female backing vocals. Some of the following songs are more into guitar, but always featuring sublime electro treatments. The Sevanick brothers took care to achieve their work with unique sound treatments and overwhelming sound blasts. Just pay attention for “Hollow Victory” which totally illustrates the multiple influences running through this work and, which have been industrialized by ‘dirty’, powerful sound constructions.

Mindless Faith are genius ‘power makers’. They’ve this magic formula to inject an extra boost into their work by the sublime symbiosis of electronic manipulations and hard guitar riffs.

“Leachate” and “Dead Inside” both are two more potential hits. The female backing vocals on “Leachate” inject a kind of naughty witch approach while “Dead Inside” reveals an outstanding trance-minded break.

A few other cuts like the instrumental “13th Floor” and “Dead To Defeat” reveal a surprising, but once more brilliant psychedelic element in the guitar playing. It sounds a bit like music from another dimension or the rape of psychedelic music by industrial noises.

Conclusion: I’ve never been disappointed by Mindless Faith, but “Eden To Abyss” left me rather stupefied for its global power and intelligence in sound. It also is one of the ‘best from the best’-releases I’ve heard this year!